Nemtsov march turned into crazy quilt about nothing

On Sunday, February 26, a number of events took place in several cities of Russia in memory of Boris Nemtsov, who was assassinated on February 17, 2015. It was obvious in advance that the marches and demonstrations would be held in a political key, because there was a reason for it. 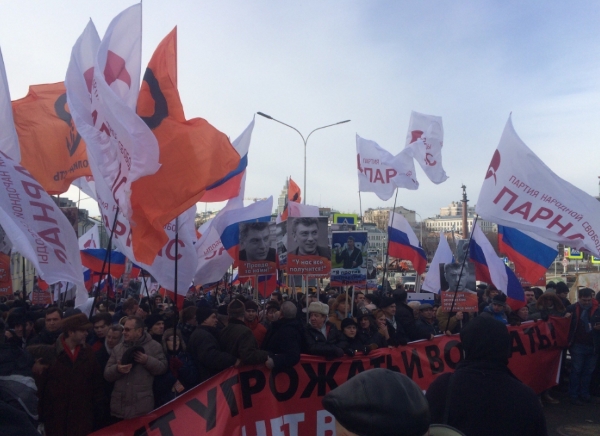 The actions were conducted in Novosibirsk, St. Petersburg, Oryol, Nizhny Novgorod, Yaroslavl, Voronezh and several other Russian cities. Most attention was focused on the march in Moscow just because Moscow is the capital, and the number of people that take part in such events is larger.

This time, organizers said that there were as many as 30,000 participants in the march in memory of Boris Nemtsov in Moscow. The march was supposed to start at 2:00 p.m. MSK, but it actually happened later.

In general, the event was a political action, rather than a march in memory of opposition leader Nemtsov. The explanation to this is simple: there are no other causes, for which Russian liberals could collect an impressive amount of people. The organizers of the march tried to gain as much profit as possible for themselves.

As soon as the participants of the march started gathering, one could see many flags with party logos of such organizations as Parnas, Yabloko, Solidarity and others. One could even spot a few yellow flags of Mikhail Khodorkovsky's Open Russia organization. Parnas leader Mikhail Kasyanov arrived with his bodyguards, but he was doused with green paint almost instantly. The "attacker" was arrested. No other serious incidents were registered.

It is worthy of note that people holding Ukrainian flags were not allowed to take part in the Moscow march in memory of Boris Nemtsov (although one could see Ukrainian flags during a march in St. Petersburg). However, a few people with the flags of Crimean Tatars were allowed without problems.

As long as it was a political event, its slogans were political too: "Russia without Putin", "Down with the power of the KGB," "We won't forget, we won't forgive," etc. The beginning of the march was delayed because organizers of the event wanted to carry an anti-Putin banner at the forefront of the column. Police officers reasonably pointed out that the march was not devoted to Putin. The banner was replaced.

In addition to supporters of liberal organizations, a group of nationalists was seen among the demonstrators too. They had their own agenda: "Glory to Russia", "Go, go nationalism", etc. Another participant of the march informed everyone that Navalny was "our president." Ukraine also found its support with "Hands off Ukraine" slogan. In general, everyone tried the best they could.

Even though organizers announced the participation of 30,000 people, officials with the Moscow police department said that there were nearly 5,000 participating.

Blogger Dmitry Puchkov told Pravda.Ru that the organizers of the event did not even have a goal to honor the memory of Boris Nemtsov. "There is a goal to organize a political action. This is what citizen Nemtsov was doing when alive as he was participating in all sorts of "strategies-31" and other nonsense. This is why they lay flowers on the bridge (where Nemtsov was shot - ed.), but no one goes to the cemetery where he was buried. They want to hang out on the bridge to attract attention," the blogger said.