Putin: We are one people and we have only one Russia 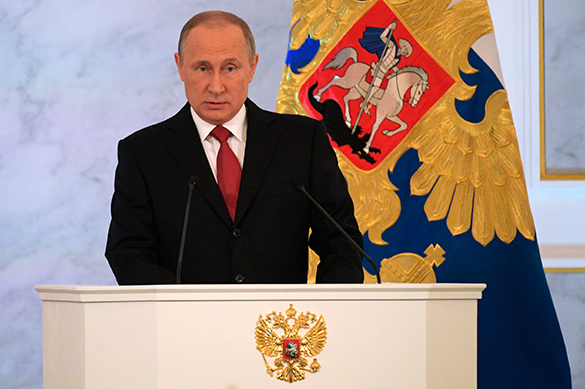 In the opening of the speech, Putin noted that he would pay first priority attention to social issues, as well as issues of economic and domestic policy. The President noted that Russian citizens have  united "around patriotic values," but still, there are many problems in the country that people are not happy with. "People expect that they will be provided with broad and equal opportunities," Putin said.

Putin referred to the elections to the State Duma in September 2016. "The initiative to return to the mixed model of elections of deputies was supported in the Address from 2015. The course to improve the competitiveness of elections is justified. The authority of legislative power has improved greatly, and United Russia party holds special responsibility at this point.The party that celebrates its 15th anniversary today should organize its work in a way to fulfill all the promises," Putin said.

"It does not go about some dogmas or false unity, or the endorsement of certain worldview. As you all know, we have had all this in our history, and we are not going back into the past," the President said.

Vladimir Putin stressed out the importance of the strong state and the unity of the Parliament against the backdrop of turmoil in the world. "Is it possible to achieve significant political objectives in a fragmented parliament? Is it possible to adequately develop in a weak state? The answer is obvious, of course, no," said the President. "We are concerned about the growing number of political, social, religious conflicts in the world. All of this is superimposed on the migration crisis," the head of state said.

Completing the introductory part of his speech, Putin said: "Let us remember that we are one people, and we have one Russia."

Vladimir Putin then said that the policy of the Russian authorities aims to support people and family. "The natural birth rate continues growing. The birth rate coefficient that we have today is 1.7, which is higher than that in other countries.

Speaking about economic problems, Putin recalled the introduction of sanctions against Russia two years ago. "However, the main reasons for the economic slowdown are hidden in our internal problems," he said.

"The decline in the real sector has stopped, there is a slight growth taking place. A number of programs for the support of industries have played an important role. Industrial production started growing. In 2015, more than 85 million square meters were introduced - this is a record figure in the history of the country," he said.

Russia has managed to maintain macroeconomic stability and preserve gold and currency  reserves of the Central Bank.

"The agricultural complex today is a successful industry that feeds the country and conquers global markets. The sanctions will not last forever, and consumers need to have a competitive situation on the market, so we need to take advantage of this situation," Putin said.

According to him, Russia's exports of agricultural products return more revenues than arms sales.  "Not that long ago, we could not even imagine this. In 2015, our agricultural sales amounted to 16.2 billion, and the number is expected to grow this year," Vladimir Putin said.

The President also spoke about the support for entrepreneurship in Russian regions. Putin noted that one needs to improve supervisory bodies and their transparency. Instructions that bind businesses but do not improve quality of services need to be canceled. The President ordered "to clearly define the legal status of self-employed people, to enable them to work properly and safely."

According to Putin, the state should be on the side of business. "Justice is about expansion of freedom and the creation of conditions for work that bring respect, wealth and success," said the Russian leader.

As for the topic of the anti-corruption struggle, Putin stated: "Official position, top connections and past achievements can not be a cover for unscrupulous government officials. However, no one but the court has the right to decide whether a person is guilty or not," Putin said. He stressed out that "the vast majority of public servants are honest and decent people who work for the good of the country."

Putin also complained of the tendency to stir up around high-profile corruption cases. "The fight against corruption is not a show. It requires professionalism, seriousness and responsibility. This is when it can bring results and receive support from the society," Putin said.

Putin also reminded of attempts of external pressure that Russia has faced recently. "They brought into play everything - from myths about the Russian aggression, propaganda and interference in other countries' elections to the harassment of our athletes, including Paralympic athletes," said the president. "Staged information campaigns, the invention of dirt, mentoring teachings  - all are tired of that," Putin said.

Putin warned that Russia may "teach" anyone a lesson if need be. "But we understand the extent of our responsibility and we sincerely want to take part in the solution of global and regional problems, where our participation is appropriate, necessary and in demand, of course," said the president.

Putin said that Russia is not looking for enemies - Russia needs friends. Yet, Russia will not tolerate it if her interests are encroached upon. "We want and we will independently manage our own destiny, build our present and our future without any tips and unwanted advice from anyone else," the President said.

Putin stated that Russia remained opposed to any form of restriction of freedom of speech and censorship. "At first they would criticize us for practicing censorship in Russia, but now they practice the same," Putin said.

At the end of his address, Putin spoke about the international agenda.

As for important directions in the Russian foreign policy, Putin singled out relations with China, Japan and India. "Once again, I would like to emphacise that Russia's eastern policy is not based on opportunistic reasons of today, not even on the chilled relations with the United States or the European Union - it is based on long-term national interests and tendencies of global development," the Russian President said.

Putin said that Russia was ready to cooperate with the new US administration. "We share common responsibility to ensure international security and stability and strengthen non-proliferation regimes. I would like to emphasize here that attempts to break the strategic parity are extremely dangerous and can lead to a global catastrophe," the President of the Russian Federation warned.

Putin also said that Russia was ready to cooperate with the new US leadership in the fight against international terrorism. "This is what our military men are in Syria for. Terrorists have suffered significant damage. The Russian Army and the Russian Navy have convincingly demonstrated that they are able to work effectively far away from permanent places of deployment," the Russian President said.

In conclusion, Vladimir Putin said that the trials and difficulties of the past few years have only made Russia stronger. "We were not dealing with problems of survival, we were thinking of our development agenda. Today, this agenda comes to the foreground," concluded the head of state.

Putin: Attempts to achieve military superiority over Russia will fail