Putin does not see the end of the era of hydrocarbons

Russian President Vladimir Putin, speaking at the World Energy Congress in Istanbul, made a number of important statements about the development of the global energy industry and the situation on the oil market. 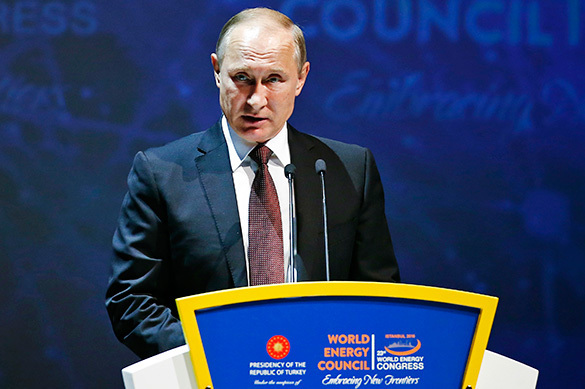 "Our goal, common goal, is to ensure that all people in the world have access to modern energy sources. Let me remind you that almost two billion people in the world do not have this access today. One needs to remove energy limiters on the way to common economic growth and development, to make electricity, light and heat basic comforts that even residents of world's poorest countries could use," Putin said.

At the same time, Vladimir Putin said that in the near future, world energy would still be based on the production of hydrocarbons.

"After oil prices have fallen, many started saying that the era of hydrocarbons was coming to an end, that one should look up to alternative sources of energy. I think that there is no real reason for such far-reaching conclusions yet. At least, not now. However, mankind is moving towards green energy, which is certainly a general path of development, the right way. The demand for renewable energy is growing faster than the demand on energy from conventional sources," said Putin.

At the same time, the demand for oil and gas continues to grow, "although not as rapidly as before", he added.

Regarding the stabilization on the oil market, Russia is ready to join OPEC countries to either freeze or reduce oil production.

"In this situation, we consider that freezing or even cutting oil production is perhaps the only solution to preserve stability for the world's energy industry, - the Russian president said, - Russia is ready to join measures to limit production, and we encourage other oil exporters to do so," Putin said in support of the recent initiative from OPEC to set limits on oil extraction.

In his speech at the World Energy Congress, Putin did not elaborate on the topic of the Turkish Stream pipeline. He only said that Russia and Turkey had serious intentions on the subject. In addition, the president announced plans to expand the country's export of hydrocarbons to the east - to China, Japan and India.