The choice of the name of the largest NATO military exercises in 2016 - "Anaconda" - was not incidental. The name reflects the plan of the West to stir up protest sentiments in Russia and decrease the popularity of the sitting administration. How can Russia kill the snake? 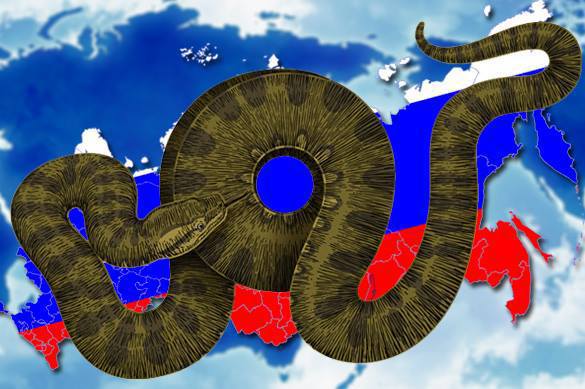 The ultimate goal of the plan is to deprive the Russian administration of control over the Russian society. In this case, Western strategists believe, Putin will have to ask the West to bring Russia back into the rank of "civilized" countries.

The West has been trying to tighten the loop around Russia's neck for quite a while already: economic and financial sanctions, declining oil prices, the revolution in Ukraine, the Turkish Gambit (to prevent the implementation of the Turkish Stream project), the ongoing buildup of NATO forces near Russian borders, the doping scandal and the political fuss at Eurovision Song Contest.

Western journalists believe that the final stage of the operation is close. According to Timothy Ash, the stage will begin when Aleksei Kudrin comes to the Russian government after the ruling United Russia party suffers a defeat at the parliamentary elections in September. Below is an excerpt from an article by Timothy Ash for The Financial Times:

"If as I suspect United Russia polls in the 50-60 per cent range or less, I expect Putin to respond by reshuffling the government, probably ousting PM Medvedev and bringing in a reform minded name such as Alexei Kudrin. In appointing Kudrin, Putin will not be thinking of risking real economic reforms this side of presidential elections, but hoping to build bridges with the west, to signal a desire to change so as to win western support for moderation of sanctions."

The West is a colossus on clay legs

Apparently, the Western anaconda will try to strangle Russia in September, after the elections to the State Duma. How can Russia defend itself? Something has been done already. For example, the US Agency for International Development, USAID, aka the organizer of "color revolutions," no longer has its presence in the Russian Federation. Strict control has been established over the activity of other similar agencies. The law about foreign agents makes it clear where the pro-Western "fifth column" takes it money from.

Additionally, Russia should eliminate election fraud. Secondly, special services should prevent any attempt to orchestrate regional Maidan-style riots after the elections. Thirdly, the media must shed light on those people, who try to orchestrate such riots - it goes about Mikhail Kasyanov and others, although this is being done in the country already.

The West will try to attack Russia in cyberspace as well. Russia is likely to be accused of hacker attacks on US-based servers, particularly of the website of the US Democratic Party and Hillary Clinton's email. Obama has already threatened to introduce appropriate penalties for the countries that conduct hacker attacks. The USA is the center of the Internet in the world today. However, sanctions on the Internet will be equated to declaration of war.

Another area for Western activity is the organization of terrorist attacks in Russia. According to Sputnik, there are at least five ISIS training camps in Kosovo. The camps recruit terrorists via a variety of "non-governmental" organizations that operate in Kosovo. A source close to Russian special services warned that such camps may appear in Macedonia and Bosnia.

The West may also "unfreeze" the military conflict in Ukraine or stage another terrorist attack similar to the crash of the Malaysian Boeing over the Donbas. This is where the West may follow its past practices - suffice it to recall the South Korean Boeing disaster in 1983. Another "Litvinenko" or "Magnitsky" is also possible.

The plan will not work if Russia tries to strengthen its influence rather than preserve it. Russia has already done a lot at this point: returned the Crimea and switched the relations with the West into the format of a dialogue of sovereign states. Russia should declare "the moderate" opposition in Syria terrorists before striking a powerful blow on them again. As for the relations with Turkey, Russia should take advantage of Turkey's influence in Syria, force Erdogan to cut terrorist supply channels, resume the Turkish Stream project and find new allies in the Balkans.

To crown it all, Russia should seek China's support. If China supports Russia's reunification with the Crimea, Russia may support China in the South China Sea. After all, the West is a colossus on clay legs. We should not wait for power in the USA to change. The time to act is now.