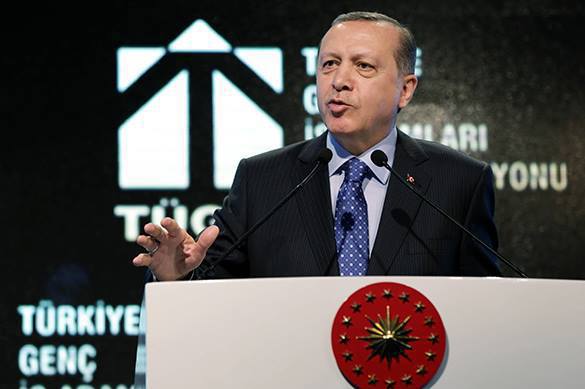 "From time to time, (Russia) does not refrain from violating our airspace," said Erdogan during a meeting with local officials in Ankara.

Erdogan did not specify when and where the violations took place. He stressed out, though, that Turkey was not an enemy of Russia and the Russian people.

"On 29 January 2016, a Su-34 of the Russian Air Force violated Turkish airspace. Turkey repeatedly warned the Russian plane in Russian and English prior to the violation," Turkish officials said. On January 29, "the Russian ambassador was invited to the Turkish Foreign Ministry to explain the incident. However, Turkey did not specify where exactly the violation took place.

Russian Defense Ministry spokesman Major-General Igor Konashenkov said that the Su-34 had not flown into Turkey's airspace. According to Konashenkov, the statements from Turkish officials were nothing but unsubstantiated propaganda.

The Russian-Turkish relations were seriously ruined after a fighter jet of the Turkish Air Force shot down a Russian Su-24 bomber on November 24. One of the pilots was killed. Another Russian military man was killed in the operation to rescue the surviving second pilot of the downed aircraft.

Strangely enough, Turkish President Recep Tayyip Erdogan has spoken about a possibility to normalize relations between Turkey and Russia.

Erdogan said he did not think of the Russian people as Turkey's enemy. According to Erdogan, he is sorry that "Russia has lost a friend like Turkey because of two pilots."

"For a country that accepts four million tourists from Russia - this is impossible. Our trade reached $35 billion, and we wanted to take this figure to 100 billion. It's a pity that Russia has lost a friend like Turkey because of two pilots," Erdogan told the heads of local administrations in Ankara, RIA Novosti reports.

Yet, the Turkish president is convinced that Russia is solely responsible for the incident with the downed Su-24.

"They say that if we had not shot the plane down, we would not have reached such a crisis in relations with Russia. Why don't they say that if Russia had not violated our airspace, we wouldn't have come to this?" Erdogan said.

Recep Tayyip Erdogan said earlier that Turkey would never apologize for shooting down the Russian fighter jet and killing two Russian military men. The head of the Turkish parliament, Ahmet Davutoglu, confirmed Erdogan's statement when he said that no Turkish official would ever apologize for the incident.

Meanwhile, it has been reported that the United Arab Emirates (UAE) may replace Turkey in the shipments of vegetables and fruits, especially citrus fruits, to Russia,  Agriculture Minister Alexander Tkachev said.

"We would like to receive fruits and vegetables from the UAE, taking into consideration the fact that the shipments of these products from Turkey have ceased," the official said.

"We know that the UAE is a transit hub for many countries of the Persian Gulf and the Middle East. We need to take advantage of this fact for the interests of our countries," the minister added.

On January 1, 2016, Russia banned imports of certain products from Turkey and suspended the visa-free regime with Turkey. Charter flights between Russia and Turkey were canceled too. On January 25, it was reported that Russian President Vladimir Putin promised to expand sanctions against Turkey.