Putin orders immediate destruction of any threat to Russia in Syria

Russian President Putin spoke at an extended session of the Defense Ministry Board of the Russian Federation on December 11. 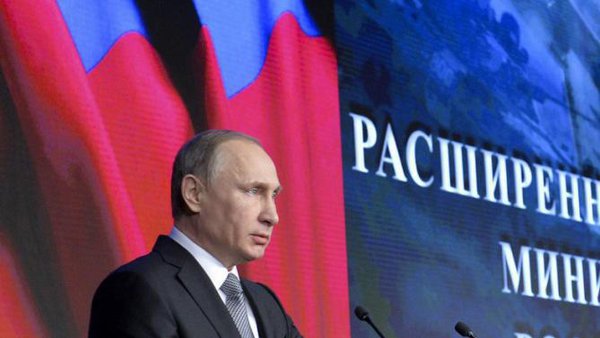 Putin spoke about Russia's strategy to defend national security interests, about the support for Russian military men who take part in operations outside Russia, about the struggle against terrorists in Syria and against international terrorism on the whole.

About the antiterrorist operation in Syria

Moscow's support for the antiterrorist operation in Syria at the request from the legitimate president of Syria has made it possible to change the situation in the struggle against the Islamic State (aka Daesh).

"The integrated use of the forces of the Russian Air Force and Navy, the use of state-of-the-art high-precision weapons has made it possible to cause a serious damage to terrorist infrastructure, thus giving a qualitative change to the situation in Syria," Putin said.

President Putin also warned those, who may try to arrange provocations against Russian military men in Syria, adding that Russia has already taken measures to ensure security of Russian servicemen.

"I would like to want those, who try to organize any sort of provocations against our military men. We have already taken additional measures to ensure security of Russian military men and our airbase. We have enhanced security with the help of air defense systems, and all actions of our strike aircraft are conducted under cover of fighter jets," Putin said, RIA Novosti reports.

"I order to act as tough as possible. Any targets threatening the Russian group or our ground-based infrastructure must be immediately destroyed," Putin said speaking at the extended session of the Defense Ministry Board. He did not specify what kind of threats he was talking about.

Russia's military sphere has experienced considerable changes during he recent years, both in terms of the army arsenal and the strategy of military actions.

Russia has increased the number of military exercises and altered the plans of military drills, having this improved the defense image of the country in the eyes of key defense forces of the world - NATO and the USA. However, these plans should not entail excessive costs for the Russian budget, the president said.

"I ask to strictly control the spending of assets within the scope of the state defense order and to use a new financial monitoring system for the purpose. I have said this before and I am saying it again - we have no spare money. All our plans must be implemented within the limits of time and budget assets," Putin said.

Nuclear weapons demonstrate the power of the defense industry of a country. However, the control over the use of nuclear arms should be strictly structured to avoid any threats to international security, Russian President Putin said.

About the support for Russian military men

Russian military men represent the interests of our country everywhere - in internal troops, at border checkpoints, in international counterterrorist operations. The president reminded the defense ministry of the importance to elaborate measures for the support of Russian military men, including in their civil life.

In 2016, the Russian government will assign 36 billion rubles for housing subsidies. In addition, 124 billion rubles will be provided for the construction of social objects of military infrastructure, Putin stated.