Russia to build largest and super powerful destroyer since 1989

In the near future, the Russian Navy may receive a large and powerful destroyer. The main objective of such a vessel will be to create an "umbrella" above the sea. The project of the Russian destroyer is known as the "Leader" (Project 23560). According to experts' estimates, it will be the largest, most expensive and state-of-the-art Russian vessel since 1989. 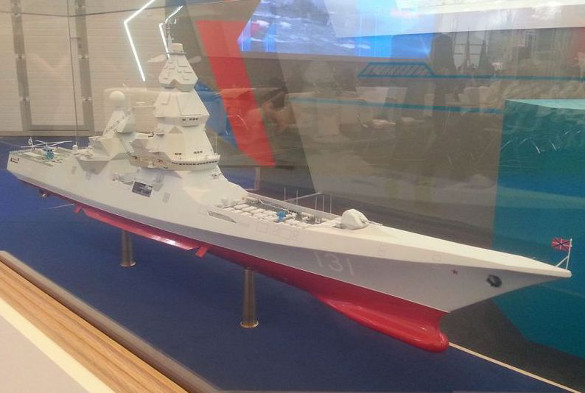 During the times of WWI and WWII, destroyers were not used to attack enemy fleet. Destroyers proved to be universal vessels instead. As soon as radars and missiles appeared, destroyer vessels were the first to carry them on board. Soviet destroyers turned into large antisubmarine ships, whereas US destroyers were the ships with guided missiles on board.

The US destroyer Zumwalt, in the course of the evolution of these ships, has surpassed in size even the battleships of the Russian-Japanese War and became one of the largest warships of its class. It was Russia's Peter the Great missile cruiser could come near the US ship.

In the foreseeable future, the Russian Navy may receive a strong and large destroyer. What kind of a ship will it be?

As experience shows, the displacement of the ship that carries modern means of detection and fire control (high power radars with antenna 10 meters in diameter), as well as ammunition of dozens of long-range anti-aircraft missiles, should be at least 7-8 thousand tons. Such a vessel should have high masts. The higher the masts, the easier it is for radars to intercept enemy missiles, especially those flying at low altitudes.

If such a ship also carries anti-aircraft missiles, cruise missiles and anti-submarine torpedo tubes, a helicopter and artillery, the displacement will increase considerably. The engine has to be nuclear  in this case, and Russia has an extensive experience in building fine engines for ice breakers.

It just so happens that the displacement of the new Russian vessel will be about 18,000 tons. This will make the ship comparable to the Dreadnought of Britain from 1906!

In a nutshell, it will be the biggest, most expensive and modern Russian ship since 1989. Fleets of the world have obtained a multitude of large and well-equipped vessels since that time. Now it is Russia's turn to build a 18,000-ton nuclear-powered vessel.

Also read: Russian tanks on top of the world

Clearly, there is no data on the basic parameters of the would-be ship. However, it was said that the ship will have a 50-meter high "pyramidal mast." The mast will enable the ship to detect low-flying objects at a distance of 20 nautical miles at sea level. The second, lower mainmast, will house communication systems.

The design of the ship includes the reduced radar visibility technology. Missiles are launched  vertically and can even turn where necessary. There will also be two chimneys on the ship. This suggests that the ship will be equipped with gas turbine engines that will be powered with conventional fuel.

The vessel itself will be a nuclear-powered vessel. A nuclear reactor ensures an unlimited cruising range and does not need thousands of tons of liquid fuel. However, a nuclear engines has its disadvantages.They include a large size of the carrier vessel, as well as expensive and complicated maintenance. To crown it all, the ship will not be able to enter the Black Sea, because nuclear-powered vessels are not allowed to navigate there. There are other ports that a nuclear-powered ship will not be able to enter, but the entire project still has a lot more pluses than minuses.

A nuclear engine is a "sea of ​​energy". A modern ship always needs energy, especially if it is going to carry a railgun - a weapon that fires projectiles with the power of electromagnetic field. In addition, the ship will need the power for 3-D printers that will appear on board combat vessels in the near future. The printers will be used to produce plastic drones for reconnaissance activities far away from the ship.

At any rate, the model of the Russian Leader already exists. We can only wait for the time when the new ship is born.