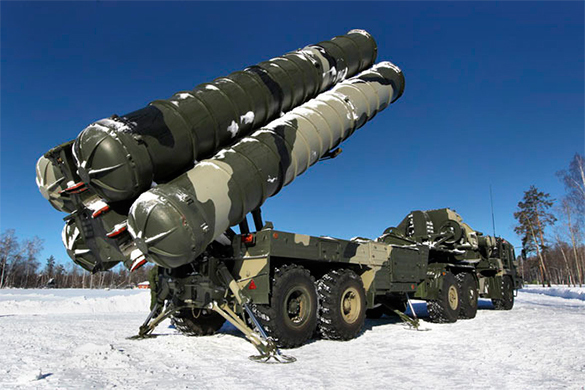 "Anti-aircraft missile system S-400 "Triumf" is second to none in the world and is recognized as the most advanced system of the kind. The idea to create a long-range system appeared during the 1990s to destroy targets at a maximum range at medium altitudes.

"The missiles that were previously developed for the S-300 system can also be used in the S-400 complex. The range of detection systems depends not only on technical parameters but also on geography. Therefore, the S-400 has several options for long-range guidance.

"The heart of the S-400 system is the head of mixed active and semi-active guidance that had been developed since the 1980s. The head has a function to search for enemy aircraft in a given area. That is, the missile arrives to the designated area and starts looking for the target.

"Also, following external commands, a missile can receive information about the enemy and take aim directly in the area designated for destruction. This perfect system was created by the team of engineers led by Almaz-Antei chief designer, Professor Lemansky.

He was personally in charge of all the works. People would not sleep at night as they were making the weapon that would be capable of destroying not only aeroballistic, but also ballistic targets, to protect the sky above Russia. Unfortunately, during the final tests in 2007, Lemansky tragically died right on the range ground. A street in the town of Elektrostal, the Moscow region, was named in his honor."

"What targets can "Triumf" detect and destroy?"

"The S-400 complex consists of several vehicles. The anti-missile system includes a command post, a radar complex and automated equipment, a multi-functional radar and a launching system that ensures all pre-launch operations.

"The MRLS radar can detect 300 line targets simultaneously. The electronic equipment of the system offers a few options to the commander, who makes a final decision. Electronic equipment analyzes air traffic situation on their own and takes aim, while a person controls the situation and makes decisions with the help of the equipment.

"The S-400 system can use four types of missiles and four options for obtaining targeting, receiving information from both internal and external sources.

"To date, there are no analogues to Russia's S-400 in the world. This is recognized by all professionals in the world. The US-made Patriot PAC-5 is a pitiful semblance of Russia's S-300 PM-2. The American system can not even be compared with the S-400 as it is too far behind it on all parameters.

"Interestingly, Russian military commanders offered to demonstrate the abilities of the S-300 and the Patriot systems during an arms show in Abu Dhabi. We were ready for the event, but the Americans refused."

"Why did they refuse?"

"The Americans are not ready to work, if the target suddenly appears from another direction. They have no rotating antenna post - they launch missiles in an inclined plane. Russia's state-of-the-art systems can protect air space of the country effectively. And of course, our air defense continues to improve."