Russian Defense Minister Sergei Shoigu has recently paid visits to Venezuela, Nicaragua and Cuba. The details of his negotiations with Raul Castro remain undisclosed. It was said, though, that in Nicaragua, Minister Shoigu signed an intergovernmental agreement on a simplified procedure for naval ships to enter Nicaraguan ports. The Russian minister also signed a memorandum on cooperation in the naval area. 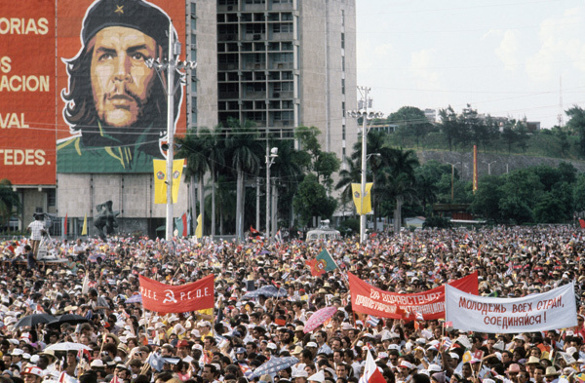 Pravda.Ru interviewed Director of the Center for Public Policy Research Vladimir Yevseyev in an attempt to find out how the countries of Latin America can help Russia stop the West in building a dominant position.

"I believe that the visit [of Russian Defense Minister Sergei Shoigu] was not incidental. Through the territory of Nicaragua it is planned to build a new canal parallel to Panama Canal. In this case, vessels of the Russian fleet will be able to enter the Gulf of Mexico, that is exit the Pacific Ocean to enter the Atlantic. This is highly important, because in this case, Russia will be able to ensure so-called nuclear deterrence, because the Russian navy has long-range cruise missiles. If such Russian vessels are deployed somewhere near the territory of Cuba, they will be able to attack the United States. This is our response to the deployment of US military objects near the Russian border. If the United States continues to behave the same way, probably, Russia will make further steps to resume the work of the military facility in Lourdes," Vladimir Yevseyev told Pravda.Ru.

The expert noted that in general, such cooperation would involve technical support for the navy. "Afterwards, perhaps, strategic aviation aircraft will be able to make stops there. Therefore, the US policy aimed at creating NATO structures on Russia's western borders will apparently receive a response. I want to say that the United States is quite vulnerable. One may eventually have to create missile defense from the side of Florida, rather than Alaska. All these issues arise and require huge financial resources. I think it will convince the United States of the short-sightedness of this kind of policy. The Americans thoughts that Cuba would fall into their arms, but the Cubans asked the Americans to withdraw the Guantanamo military base first," the expert told Pravda.Ru.

Vladimir Yevseyev stressed out in an interview with Pravda.Ru, that the West should not comment with Russia from a position of power. "Russia has a very good position in Nicaragua. In fact, Russian Defense Minister Sergei Shoigu is an ambassador of peace, despite the fact that he serves as the defense minister. As an ambassador of peace, he solves all sorts of problems very successfully. Shoigu is capable of building relations in the military sphere."

American analysts (Douglas Farah, President of IBI Consultant; Liana Reyes, coordinator of the research group at IBI Consultant) wrote that Russia's growing influence in the Western Hemisphere became a new strategic challenge for the United States, as Russia could obtain new political, military and economic leverage. According to the experts, the number of USA's friends in the Western Hemisphere has been declining.

"I think this is just a trend for the tie being, but it is unfavorable for the United States. Clearly, the United States can control Europe almost entirely. At the same time, Latin America is waiting for Russia's presence to materialize. Russia is not going to finance Cuba or Nicaragua, but it can create an alternative for the United States for them. This is very important for many countries, because they feel more or less confident in the international arena. Clearly, Nicaragua in unable to stand up against the USA. Yet, if Russia and China are there to lobby the interests of  Nicaragua, then this country may feel more independent. That's the value of an alternative," Vladimir Yevseyev told Pravda.Ru.

The expert noted that India was the first country to have experienced such an alternative. Developing ties with the USA is a priority for India, but the country eyes the Russian arms market very seriously. "This is being done to ensure that India does not become dependent on the United States. No one wants to depend on the USA - that's the problem. From this point of view, Russia is a very attractive partner," the expert concluded.