A recent poll conducted by Levada Center showed that 69 percent of Russian citizens believe that Russia should continue its decisive policy in response to Western sanctions. The number of respondents, who believe that Western sanctions have created problems for them, made up 34 percent. At the same time, 57 percent said that the sanctions had created no problems for them at all. 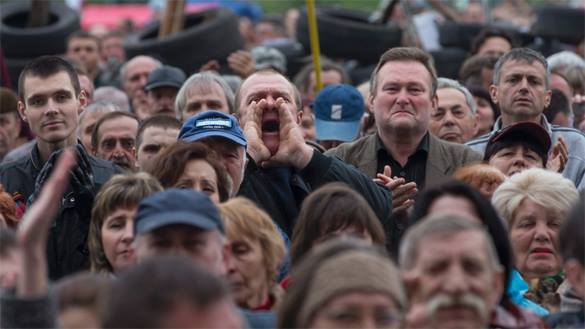 However, the number of those, who are concerned about Western sanctions against Russia, has been growing recently. Last year, as many as 31 percent of respondents said that Western sanctions had created serious problems for them. In February 2015, their number has grown to 34 percent. Citizens of low consumer status complain of sanctions-related problems four times more often than those, whose income is higher.

Respondents were also asked how, in their opinion, Russia should act in response to Western sanctions. The most popular answer to this question was: Russia should  continue its policy, despite sanctions (in December - 66%, in September - 68%). This point of view is popular among elderly people, as well as residents of smaller towns and villages.

Levada-Center Sociologist Karina Pipia noted that the above-mentioned survey showed strong consolidation of the population and the authorities.

"We can see that even though the number of those Russians, who are concerned about Western sanctions, has grown, the majority of Russian people still believes that Russia should not pay attention to Western sanctions. The Russians are unanimous in their opinion that Russia should continue its policy - particularly, with regard to Ukraine. The high rating of the president - 85 percent for the third consecutive month - reflects this position as well. Russian people fully support the country's administration that consider it necessary to continue to adhere to this policy, despite measures from the West. Sanctions are seen as a sign that the West respects and fears Russia," said the sociologist.

Many Russians believe Russia should impose more sanctions on the West

Respondents were also asked to answer the question of which measures the Russian administration should take under the conditions of severe economic sanctions against the backdrop of Russia's policy in respect of Ukraine and the Crimea.

As many as 34 percent of Russians believe that Russia needs to introduce stringent retaliatory sanctions against countries of the West. Thirty-two percent of the polled offer to strengthen economic and military ties with the Middle East, China and India. The same number of Russians offer to simply ignore the measures of Western countries and continue running the course of domestic and foreign policy. Eighteen percent suggested Russia should increase the military budget and allocate additional funds to strengthen the defensive capability of the country. One-tenth of respondents believe that it is necessary to look for a compromise and revise one's attitude to the issue of Russia's reunion with the Crimea and the support of militia forces in the Donbass, the Izvestia newspaper said.

"The Russians are divided on how to respond to these anti-Russian sanctions. Opinions vary here, but most Russians believe that Russia should not interfere in the military conflict. As a recent of our recent polls, we can see that the majority of Russians are aware of the approach of the economic crisis. However, almost a half of respondents believes that the government is capable of solving economic problems that Russia is facing," Levada sociologist said.