Russian and Bulgarian officials go tooth and nail at one another 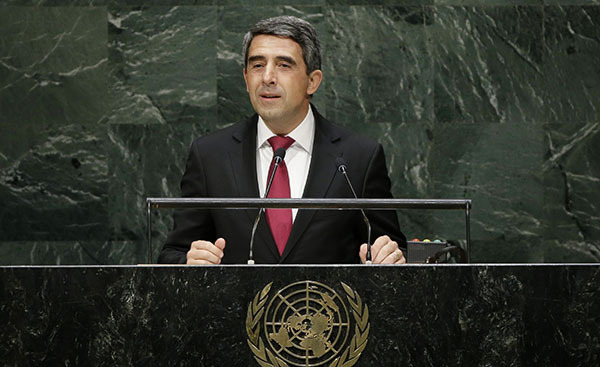 The remarks from the President of Bulgaria about Russia as a "nationalistic and aggressive" state caused an adequate reaction from the Russian administration. Commenting on the interview of Bulgarian President Rosen Plevniliev with German newspaper Frankfurter Allgemeine Zeitung, a spokesman for the Russian Foreign Ministry said that Moscow believes such statements were inadmissible.

In the interview, a journalist asked the Bulgarian president to explain what he meant by "total propaganda of Russian politics" and "open information warfare" against Bulgaria in his speech during the NATO summit in Wales. Plevniliev answered: "We all want as a partner a country that has produced Tchaikovsky, Tolstoy and Dostoevsky," Plevneliev was quoted as saying. "But facts show that today we have to deal with another Russia - with a nationalist, aggressive state under a president who does not regard Europe as a partner, but as an opponent."

"Such statements, of course, raise most serious concerns with us. It is regrettable that once again, reiterating unfounded allegations of the so-called annexation of the Crimea and attempts to dictate to Ukraine, the President resorted to impermissible rhetoric. This is being done solely for the sake of short-sighted pro-Western conjuncture that ignores reality and violates centuries-old traditions of friendship and cooperation between the brotherly peoples of Russia and Bulgaria," Alexander Lukashevich, the chief of the press department of the Russian Foreign Ministry said.

According to him, "the Bulgarian politician of such a high rank does not want to notice persistent and consistent diplomatic efforts of Russia and President Putin to regulate the crisis in Ukraine." "It is absolutely obvious that we are dealing with a deliberately distorted and selective approach to the assessment of Russia's foreign policy in Ukraine," said Lukashevich. "The remarks from the president of Bulgaria have nothing to do with the problems of bilateral cooperation and the intention to develop cooperation with Russia," concluded the Russian diplomat.

Meanwhile, Russian Vice Prime Minister Dmitry Rogozin harshly reacted to news reports saying that Bulgaria was going to refuse from Russian fighter jets to the benefit of American aircraft. Rogozin wrote in his Twitter that Bulgaria was betraying Russia.

According to Sofia Globe, Bulgarian Prime Minister George Bliznashki decided to refuse from the use of Russian-made combat aircraft, after Defense Minister Velizar Shalamanov said that the Bulgarian armed forces must not depend on Russia. In response, Deputy Prime Minister Dmitry Rogozin tweeted: "Someone known as Shalamanov convinced Prime Minister Bliznashki to betray Russia again ... in favor of used jets."

For more than ten years, the country, a NATO member since 2004, has been thinking to replace obsolete Soviet military aircraft. However, Bulgarian officials have not been able to resolve the issue. Now Sofia is going to spend 300 million euros for the purchase of eight new F-15 fighters. However, many experts believe that this amount will be enough to acquire only used American planes.

Bulgarian Foreign Minister Daniel Mitov said that Rogozin's remarks were "totally unacceptable." Officials with the Bulgarian Foreign Ministry also noted that they were not supposed to present reports to representatives of other states. "With regard to indirect accusations of disloyalty, we would like to remind their authors that the Republic of Bulgaria is a member of NATO and the EU and it is not obliged to explain its sovereign decisions to third countries," the ministry said in a statement.

The Bulgarian Foreign Ministry also noted that the relations between the two countries are based on historical traditions. Sofia will continue to "support the development of bilateral cooperation" with Moscow, but the comments like those that Dmitry Rogozin made, "do not contribute to this development."