How Putin and Russia must consider Western propaganda

Propaganda demands the most skilled brains that can be found. 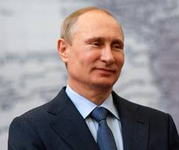 Vladimir Putin believes in rationality and in humanism and he is wrong. For western bourgeois mobs are used to believe not in truth but only in propaganda. Never underestimate the power of propaganda. With 2.3 millions of convicts, with an astronomical debt, with Guantanamo and so many wars and bombings, with the most unequal social system in the developed world, with the Ferguson fury, America is still the dreamland and the model of the global idiot. This is the brilliant result of ubiquitous propaganda.

Vladimir Putin and Russia are demonized by the most inept and ruthless propaganda in years. Yet this propaganda is one century old; it began in 1914 under the auspices of Bernays, Lord Northcliffe (who ended mysteriously in 1922) and the imperial agents who engineered the most hideous war in history. The most efficient media were always British (who devised Spanish black legend for instance) and American. At this time it was important to demonize Germany and the Kaiser to whom England had declared the war. The first result of this demonizing agenda was the infamous Treaty of Versailles in 1919 and the second Hitler in 1933.

But the big guys never give up. Ask Cameron and Obama for instance: ready for any total war. The three enemies of the empire in the last century have been Germany, Islam and of course Russia. As we know China is too waiting its punishment.

A great English mind, Lord Arthur Ponsonby studied these awful phenomena and wrote a book, Falsehood in War-Time about the techniques and lies of western propaganda during the Great War. Ponsonby was labelled a pacifist. But he was not a pacifist; he was just a gentleman who opposed western imperial roughness and its perennial methods. Remember recently Timisoara (to favour a coup in Rumania, twenty-five years before Maidan), the weapons of massive destruction in Iraq, the kindly mobs in Libya, the Malaysian Boeing. It never stopped until it has destroyed its target. These last weeks the manipulation about the video filming decapitations in Iraq illustrates again the perennial saga. The 'tale told by an idiot, full and sound and fury' must never stop.

Lord Ponsonby explains usefully why America and England adopted such abject propaganda systems, in order to motivate the draft:

The use of the weapon of falsehood is more necessary in a country where military conscription is not the law of the land than in countries where the manhood of the nation is automatically drafted into the Army, Navy, or Air Service.

Then he recognizes his uncertainty about human intelligence and credulity: for we adore being lied, even if the lie takes us to wars and disasters.

Man, it has been said, is not "a veridical animal," but his habit of lying is not nearly so extraordinary as his amazing readiness to believe. It is, indeed, because of human credulity that lies flourish.

Most important thing, it is essential to spread hysteria, like after the downing of the unlucky Malaysian airplane or like in the case of the Iraqi pictures. Hysteria is the motor of wars: remember the so-called Arab spring in Syria or Libya, remember the accusations against Vladimir Putin this summer.

The public can be worked up emotionally by sham ideals. A sort of collective hysteria spreads and rises until finally it gets the better of sober people and reputable newspapers.

Following French scientist Gustave Le Bon who had written his world-famous psychology of the crowds in 1889, Ponsonby adds that the more efficient tool is repetition. You will repeat until they believe...

There is the general obsession, started by rumour and magnified by repetition and elaborated by hysteria, which at last gains general acceptance.

To spread dialectic hysteria, Ponsonby insists on the role of intellectuals, editorialists who play the same role nowadays (see ineffable Bernard-Henry Levy in France for instance):

Perhaps nothing did more to impress the public mind --- and this is true in all countries ---- than the assistance given in propaganda by intellectuals and literary notables. They were able to clothe the tough tissue of falsehood with phrases of literary merit and passages of eloquence better than the statesmen.

John Mearsheimer has underlined in his essay about the Israel Lobby the role of Zionist literary notables who pushed America to war against any 'rogue state' or independent Arabic country. Western press and media are anyways always prepared to war and they expect any pretext, like our poor Malaysian airplane (Malaysia is a rare country that resists global order and is always punished), to jump at any targeted throat.

The invasion of Belgium came as a godsend to the Government and the Press, and they jumped to take advantage of this pretext, fully appreciating its value from the point of view of rallying public opinion.

Then Ponsonby explains the Kaiser factor: propaganda demonizes one scapegoat (the Kaiser Wilhelm then, Putin now) in order to mobilize the mobs: after the war the responsible will be charged of any sin- think of Saddam Hussein.

HAVING declared the enemy the sole culprit and originator of the war, the next step is to personify the enemy.

Putin is now a personified enemy.

As if he had watched the manipulative images of the so-called executions in Iraq, Ponsonby underlines the role of the snapshots. They push to war more than a Rembrandt and nobody questions their reality:

To the uninitiated there is something substantially reliable in a picture obviously taken from a photograph. Nothing would seem to be more authentic than a snapshot. It does not occur to anyone to question photograph, and faked pictures therefore have special value, as they get a much better start than any mere statement, which may be criticized or denied.

Everybody now in the global idiot village of poor Marshall McLuhan believes and repeats American and British lies. Then can show debris then blame Putin or Ben Laden or even Genghis Khan, the bourgeois will swallow it. Western leading nations are the best propaganda agents and manipulators. A great connoisseur as Hitler acknowledged the fact:

On the other hand, British and American war propaganda was psychologically efficient. By picturing the Germans to their own people as Barbarians and Huns, they were preparing their soldiers for the horrors of war.

As we know, the age of humanitarian imperialism and 'benevolent empires' (to quote agitator Robert Kagan whose wife planned a coup and 'fucked EU' in Kiev) is full of Barbarians and Huns we must deal with; and so we will need many soldiers and many wars in order to enforce peace anywhere. We, the international community...