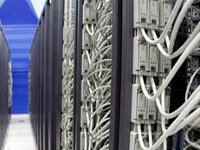 The State Duma discussed proposals about amendments to the second "anti-piracy" bill initiated fro United Russia MP Sergei Zheleznyak. The first reading of the document was held in March.

"The work group headed by First Deputy Prime Minister Igor Shuvalov has developed supplements to the already adopted "anti-piracy" laws to protect film production. This is not about a new law - we suggest using the bill by Sergei Zheleznyak adopted in the first reading," Minister for Culture, Vladimir Medinsky said.

According to Medinsky, the first amendment should stipulate a possibility to block not only content, but also whole websites, especially when it comes to piracy. The second amendment concerns the procedure of extrajudicial settlement of copyright disputes; the third one introduces penalties for copyright infringement.

The minister insists that site administrators are able to respond quickly to complaints about illegal content. "It was proved that in most cases, site owners can solve this issue in 17 minutes," Medinsky said.

As for the first "anti-piracy" law, which came into effect August 1, 2013, according to Medinsky, the law was effective for only three months, and then everything was back to normal - the "pirates" realized that no one was going to shut them down.

The Vedomosti newspaper wrote that the Ministry of Communications was not satisfied with the suggestions about penalties and measures to block sites completely. The department was supposed to agree the amendments with the Ministry of Culture, but no agreement has been achieved so far.

It was agreed with representatives of the Internet industry that they need to gradually introduce anti-piracy rules for different types of intellectual property. It was also agreed that illegal content should be banned within 36 hours. Originally, the Ministry for Culture intended to provide 24 hours for the procedure, whereas online businessmen insisted on 48.

Deputy head of the committee for legislation called for the introduction of criminal responsibility for subsequent offenders. Parliamentarians expressed a proposal to develop the procedure to liquidate legal persons convicted of "piracy," as required by law or court order.

Following the discussion, State Duma Speaker Sergei Naryshkin said that he saw no obstacles to adopt the bill during second reading before the end of the spring session.

The "anti-piracy" law came into effect in Russia on August 1, 2013. The law regulates the distribute of films and television series on the Internet in Russia. Later, two other bills were developed to expand the law to other types of content - books, music, software, photos, etc. In early May, it was reported that the two bills would be united into one, whereas the work group headed by First Deputy Prime Minister Igor Shuvalov would deal with coordinations between authors of the papers and the Internet community.