In China, Putin to sign a package of 'fantastic agreements'

On Tuesday, Russian President Vladimir Putin is to arrive on an official two-day visit to Shanghai, China, where he is expected to hold talks with President of China Xi Jinping and then take part in the IV Summit of the Conference on Interaction and Confidence Building Measures in Asia (CICA). The central themes of the talks between the two leaders will be two projects in the field of aviation - the creation of a joint wide-body long-haul aircraft and the production of Mi-26 heavy helicopter in China, the Kommersant reports. 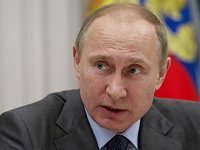 Russia, entering into such cooperation with China, indicates that it is ready to open access to Russian aircraft technologies, despite the fact that China previously resorted to building unlicensed copies of well-known Russian aircraft.

According to presidential aide Yury Ushakov, "a fantastic package of documents" is being prepared for Putin's trip to China: - 43 agreements, 30 of which will be signed. Moscow pins large hopes on gas supplies agreements, although, for the time being, it remains unknown whether the contracts are going to be signed. In addition, Putin and Xi Jinping will open joint naval exercises.

The Russian President, on the eve of the trip to China said in an interview with Chinese mass media that Russia was currently implementing a number of joint projects on 40 priority areas with a total investment of about $20 billion. Among them, the president pointed out a project on civil aircraft making. "An agreement on joint development of a wide-body long-haul aircraft has been reached, and there are plans to build a heavy helicopter," he said.

The long-haul wide-body aircraft, which Beijing and Moscow prepare to develop, should become a competitor for American and European aircraft manufacturers - Airbus and Boeing. In another project, Mi-26 helicopter will be modernized. According to the source, the development will start from scratch and exclusively for the customer.

The Russian-Chinese jumbo helicopter is expected to be twice as large as the largest in this class Mi-26. The maximum load of the Mi-26 is 28 tons, whereas the new helicopter will be able to raise 80 tons. The super heavy aircraft will be used in civil and military aviation. The would-be wide-body aircraft, as planned, will accommodate up to 400 passengers, will have low fuel consumption and high reliability.

Noteworthy, in 2013, Beijing purchased Russian arms and military equipment worth more than 1.8 billion rubles. China thus came fourth on purchases of Russian military products. At the same time, there are problems in relations between the two countries in the sphere of military-technical cooperation. Difficulties arise at the conclusion of almost every contract. For example, after the consent to supply Su-35, China required to make changes in the appearance of the aircraft.

"I'm looking forward to a new meeting with Chinese President Xi Jinping, with whom I share good work and kind personal relations," Putin said. "We'll see how previous agreements are being implemented and define new challenges for the future," said the president of Russia.

"I'm confident that the upcoming talks will give a powerful impetus to further strengthening of bilateral cooperation in all fields and enhance coordination on the international arena." The Russian president also said that the outcome of the summit and plans for the future would be reflected in the joint statement from the leaders of Russia and China, as well as in a solid package of documents to be signed during the visit.

Among other topics, Vladimir Putin and Xi Jinping will discuss issues of cooperation in the gas industry. Putin said that Moscow and Beijing were completing the work on agreements on gas supplies to China.

Putin called the energy cooperation with China successful, noting that Moscow and Beijing were consistently moving "to the formation of a strategic energy alliance." The president also reminded that the sides were implementing a large-scale projects worth more than $60 billion for the supply of crude oil to China through Skovorodino-Mohe pipeline.

Russia and China have been discussing the issues of gas supplies for ten years already, but the parties still could not agree on the price. However, due to the deterioration of relations with Europe in connection with the Ukrainian crisis, Gazprom has become more pliable, experts say.

The head of Gazprom, Alexey Miller, and the chairman of the Board of Directors of CNPC, Zhou Jiping, have recently held a work meeting. Gazprom representatives have not disclosed any results of the meeting, and only said that the two top managers discussed  issues of bilateral cooperation." For the time being, it thus remains unclear whether Russia and China are going to sign a gas agreement on May 21.

In the interview with Chinese media, Vladimir Putin also said that Russia was hoping to take the level of trade turnover with China to $200 billion by 2020. "In 2013, bilateral trade volume came close to the mark of 90 billion dollars, and this is not the limit at all," Putin said. "We will try to increase the turnover by 2015 to $100 billion and by 2020 - to $200 billion," said the president.

At the same time, Russia works to reduce the dependence of bilateral trade on foreign markets. For this reason, special attention is paid to breakthrough sectors - such as energy efficiency, environmental protection, production of medicines and medical equipment, the development of new information technologies, nuclear energy and space.

According to the Putin, Russia and China are implementing the list of joint projects on 40 priority areas with a total investment of about $20 billion. The plans, according to the president, include the development of investment cooperation, "the scale of which does not meet the real needs and possibilities of our countries."

In the interview, Putin also said that Russia was interested in participating of Chinese business in the development of the Far East of Russia. The President stressed out that for the two countries it was important not only to trade, but to "form strong technological and industrial alliances, attract investment in infrastructure and energy, to jointly promote research works, humanitarian ties, and lay a solid foundation for the sustainable development of our trade and economic relations in the future."

During the second day of Putin's visit to China, Russian-Chinese naval exercises will start in the East China Sea called "Joint Sea 2014. The two presidents will open the drills together.

According to Xinhua, the exercises will be conducted in the waters of the northern part of the East China Sea, located to the east of the mouth of China's Yangtze River. In total, 14 surface ships, two submarines, nine fixed wing aircraft, two units of marine task force and six decked helicopters will take part in the event.

The Chinese side will use the ships from East China Navy fleet, the agency said. In particular, missile destroyers Zhengzhou and Ningbo will take part in the drills for  the first time. The Zhengzhou is a missile destroyer of third generation that was passed into army service in 2013. The vessel, known as "the Chinese shield," is equipped with state-of-the-art military hardware, which was developed and built in China, Xinhua said.

Vice Admiral Tian Zhong, meeting the Russian military, said that the main feature of the drills would be to raise the level of complexity of joint action of the groups of warships at sea. In particular, he said, the parties will establish and operate in mixed groups of ships that will hold joint missile and artillery strikes on sea targets of different range.

In turn, Deputy Chief of the Russian Navy, Vice Admiral Alexander Fedotenko said that there was no doubt that the Russian-Chinese naval exercises would serve for further development of the relations between the two countries.

Russia's naval exercises with China in light of the deterioration of relations between Russia and the West over the crisis Ukrainian, appears to be an expression of Russia's support to China in the East China Sea, where the country has disputed border problems (with the Kuril Islands and territorial disputes between China and and Japan).