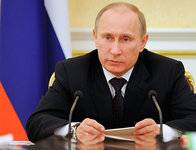 On May 8th, Russian President Vladimir Putin made ​​a statement about the situation in Ukraine during the meeting of the heads of CSTO member states (Collective Security Treaty Organization).

"An example of our neighbor, Ukraine, a brotherly nation for us, clearly shows that irresponsible policy brings a lot of trouble and losses," said the Russian president

Putin also said that Russia was not indifferent to the fate of Ukraine and confirmed the willingness to follow the agreements reached during the visit of the OSCE Chairman to Moscow. Putin stressed out that he had a "useful conversation" with OSCE Chairman Didier Burkhalter in Moscow.

Putin is concerned about the resurgence of militant nationalism in Europe. "In Europe, militant nationalism is raising its head again - the one that led to the emergence of Nazi ideology. Let's not dwell on each case separately, we know where we come across such a threat," he said at a meeting with presidents of Armenia, Belarus, Kyrgyzstan and Tajikistan.

Yesterday, the Russian president urged the supporters of federalization of Ukraine to postpone the referendum on the status of the eastern regions of the country. He also announced the withdrawal of Russian troops from the Ukrainian border. To crown it all, he said that Russia would recognize the upcoming presidential vote in Ukraine legitimate, if the military operation in the south-east of Ukraine was stopped. These statements from the Russian leader puzzled Western politicians and experts.

"It remained unclear to analysts and political leaders on both sides of the Atlantic whether he was truly reversing course on Ukraine or if this was just another of his judo-inspired feints, - The New York Times wrote. - Mr. Putin said Russia wanted to spur mediation efforts led by the Europeans. He said he did not know whether talks between the warring sides in Ukraine were "realistic," but was determined to give them a chance."

American and British authorities reacted cautiously to Putin's statements. The White House welcomed his position on the peaceful regulation of the crisis, but remained skeptical about the statement on the withdrawal of troops.

"To date, there has been no evidence that such a withdrawal has taken place," White House spokesman Josh Earnest said. A similar statement arrived from NATO Secretary General Anders Fogh Rasmussen. U.S. State Department spokeswoman Jen Psaki called the referendum in the east of Ukraine, scheduled for May 11, illegal. "We've made clear that we believe the proposed referendum is both illegal and illegitimate. We need to see more from President Putin than simply calling for it to be postponed," she said.

London found Putin's statement positive. British officials reminded, though, that during a telephone conversation with German Chancellor Angela Merkel, Putin had promised to withdraw Russian troops from the border, "but eventually, only one battalion pulled back to a considerable distance." Anders Fogh Rasmussen, in turn, called on the Russian authorities to "stop supporting separatists."

It appears that Western media changed their position after the speech from the Russian president. Many Western publications were calling the supporters of federalization of Ukraine 'terrorists'. They now call them 'separatists', but also 'insurgents' and 'pro-Russian activists.'

Reuters found it necessary to clarify that pro-Russian activists are 'terrorists' in the rhetoric of the current Ukrainian government. The agency noted that Putin's statements may indicate some kind of breakthrough in the "most serious crisis between the East and the West since the Cold War.

EU Council President Herman Van Rompuy described Vladimir Putin's statement as a signal to de-escalation of the situation in Ukraine.

It seems that it was only the Ukrainian authorities that have not seen a positive message in the words from the Russian president.

Prime Minister Yatsenyuk, appointed by the Verkhovna Rada, called Putin's statements "empty talk" and "farce." He asked Putin "not to sell air." According to him, in light of the fact that Russia "requests to postpone a referendum, the Russian president should be informed that on May 11 there was no referendum planned in Ukraine."

Meanwhile, it has just been reported that members of the People's Council of the Donetsk People's Republic decided not to postpone the referendum on the independence of the region, which was originally scheduled for May 11.

Representatives of self-defense forces of Lugansk also said that they would hold the vote on May 11, as planned.

"The referendum will take place on May 11," Miroslav Rudenko, a co-chairman of the government of the Donetsk People's Republic told Interfax.