Only recently there was little doubt that the U.S. will strike at Syria, especially after reports on the use of chemical weapons. While the world was preparing for a war, President of Russia proposed the only right solution that helped to avert bloodshed. He proved once again that Russia is a peacemaker in the true sense of the word. 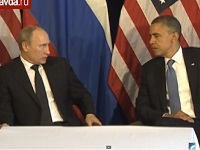 This weekend good news came from Geneva for Syria and the rest of the world. The Russian-American agreement assumes the complete elimination of chemical weapons in Syria. Along with this, even the most ardent critics of Russia are talking about the fact that the Russian authorities have shown talent of a peacemaker and could thus greatly strengthen their own position in the Middle East. In particular, this is the opinion of the ex - presidential candidate in the United States, conservative John McCain.

Last Saturday in Geneva, the Russian Foreign Minister Sergei Lavrov and John Kerry, the U.S. secretary of state, announced that the Russian and American delegations completed the tasks of the Presidents of the two countries to establish control of international forces over Syrian chemical weapons. The tense negotiations lasted over two days. When the international control over the inventory of toxic substances is established, the weapons will be destroyed.

Lavrov said that the agreed document on the Syrian issue was compromising, consensual and professional. Under this agreement, it is assumed that over the week Syria will present a complete list of chemical weapons, and then the maximum possible amount of these weapons will be taken out of the country. The U.S. and Russia have agreed that the experts of the Organization for the Prohibition of Chemical Weapons should finish the inspection in Syria by November. All materials and equipment related to the chemical weapons will be destroyed in the first six month of next year. Lavrov also stressed that the Syrian authorities will implement this agreement even before the deadline.

Political opponents of Russia talk about the obvious success of the Russian diplomacy. For example, influential Senator John McCain who frequently criticizes the Russian government, in an interview with NBC acknowledged that because of the agreement, Russia has taken a position in the Middle East that it had not had since 1970s. McCain is a "hawk" of the U.S. Congress who supported the military scenario in Syria.

Russian experts say that McCain is being disingenuous in his statements, as Russia has always had and still has a strong position in the region. Irina Zvyagelskaya, Professor of MGIMO, chief researcher at the Institute of Oriental Studies, shares this opinion.

However, according to Zvyagelskaya, McCain is exaggerating. "The Soviet Union and then Russia has always had a strong presence in the Middle East," said the expert. "As for the Soviet Union, it was the most powerful superpower that had loyal allies in the region and a rather strong position. After the collapse of the Soviet Union, the Russian Federation lost these positions a little bit, but even in the post-Soviet period, Russia enjoyed certain support of the region. In some areas Russia has gotten into a more preferred position than it used to be during the times of the Soviet Union. For example, it is true with regard to the relationship with Israel that the Russian authorities were able to bring to a whole new level. "

Russia, according to Zvyagelskaya, has quite successfully maintained relationships with various members of the Middle East process, including Hamas, Israel, Syria, Iran, the Gulf countries, and so on. This peculiarity of the Russian politics is noted by all observers.

"Therefore, it would be definitely wrong to say that only because of the Syrian proposal the Russian Federation could be a player, and before that it was a nobody," the expert is convinced. "Russia was able to come up with such a proposal on Syria precisely because it is a very influential player in the Middle East."

Anatoly Egorin, professor at the Institute of Oriental Studies, agrees with Zvyagelskaya. He is convinced that Russia today has a very strong position in the region.

"Russia has an increasingly stronger position in the Middle East," said Egorin. "Our influence now is very different from the one we had in the past, when we had to look back at some of the players in the region. Finally, we realized that this is Russian policy where we can make suggestions. If someone does not agree with us, we are prepared to argue and defend our own position. "

With his proposal Putin has saved not Assad but Obama - this should have been a commentary of the U.S. media on the results of the Russian-American agreement. Russia's image in the world has strengthened significantly, and the American President unwittingly helped Putin. By his apparent reluctance to go to war and constant fluctuations, President Obama has allowed the Russian President not only to seize the initiative, but impose the game rules. Vladimir Putin proved to be a more independent leader than his overseas counterpart, and has more experience in global affairs. At the moment when the U.S. raised its fist to strike, everything has suddenly changed.

Obama hesitated, and Putin took advantage of the situation. It was obvious that Obama was under pressure. He did not want to wage a war that could have been the beginning of a serious conflict. It is hard to say exactly who was pushing the American President towards war - the international oligarchy who wanted to play along with strengthening of Saudi Arabia and force a conflict with Iran, or purely American ultra-imperialists who feel that constant worsening of the world conditions is the only way to keep the U.S. in the position of the world ruler.

The U.S. Congress did not support the military operation, the people were also against it, believing that one cannot constantly fight, and that there are enough problems at home. This strengthened the doubts of Obama who knew that at this time an attack on Syria would not benefit the United States. If he chose an open conflict with Congress and public opinion, it would have cost him dearly, up to the impeachment, since many in the U.S. are unhappy with Obama.

The U.S. president was a hostage of his words about the "red line" and the architecture of the globalist world order. But he did not personally want to order a military operation.
Putin skillfully took advantage of the situation, because as a professional recruiter he could intuitively feel the opponent's weaknesses. In a half-hour conversation at the summit in St. Petersburg, Vladimir Putin offered a helping hand to Obama. Taking control of the Syrian chemical weapons will allow the U.S. President to cancel the operation. He still came out of the situation with significant image loss, but did not initiate a serious regional conflict.

Putin and Obama, like once Khrushchev and Kennedy, were able to push the world back from the brink, but this time it was the U.S. who got it there. Russia saw a huge reputation gain in the eyes of the international community, proving once again its ability to solve problems peacefully and find a way out of a seemingly hopeless situation.