Alexei Navalny can not lose with dignity

Acting mayor of Moscow, Sergei Sobyanin has won the election of the mayor of the Russian capital. According to the Moscow Electoral Committee, after counting 99.64 percent of ballot papers from polling stations, Sobyanin has received 51.32 percent of votes. 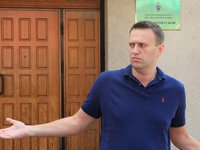 Alexei Navalny, who came second in the election, said that he did not recognize the election results. In his opinion, a second round of election should be conducted. That was a predictable outcome of the voting.

The single day of voting took place in 80 Russian regions on Sunday, September 8. The Russians were electing the heads of eight regions - Vladimir, Moscow Magadan, the Trans-Baikal and the Khabarovsk Territory, the Republic of Khakassia, Chukotka, and the capital, Moscow. In Ingushetia and Dagestan republics, local parliamentarians elected the heads of the republics.

In addition, on September 8th, elections were held for legislative assemblies of 16 regions, as well as leaders of eight administrative centers. Representatives of 54 political parties took part in the elections.

The election of the mayor of Moscow has received most of attention in the current election campaign. This is not surprising at all, given the concentration of liberal media in the capital.

Alexei Navalny and his team conducted a very aggressive campaign. According to Levada-Center, Muscovites came across agitation in support of Navalny more frequently than of any other candidate. This factor made the candidate more recognizable. By the end of the campaign, Navalny was literally everywhere.

The closer the election day was, the more obvious was the tactic chosen by Navalny's team. They tried to announce the results of the vote fabricated. The team referred to the results of surveys conducted by Navalny's headquarters. The results of those polls showed the inevitability of the second round. What else could they show? Navalny said exactly the same after the polls closed. According to him, Sobyanin had 46 percent, Navalny - 35.

The results of exit polls from polling agencies showed that there would be no second round of the vote. According to them, Sergei Sobyanin was expected to gain 52-56 percent, Alexei Navalny - 29.

The voting on September 8, from the point of view of observers and various political forces, was virtually flawless. The infamous association The Voice announced that its activists had no complaints. The party of RPR-Parnas, which nominated Navalny as a candidate, said the same.

One of the leaders of The Voice, Grigory Melkonyants, commenting on the vote, told Interfax, noted that only "chaotic disturbances were reported that were segmented and did not create a general situation."

Navalny's result may seem solid at first glance. He received more votes than sociologists predicted. If one takes a closer look at the figures, Navalny has not become the "candidate of all Muscovites." He received the support from a little more than 630,000 of more than seven million voters in Moscow. Mikhail Prokhorov received nearly 900,000 votes during the presidential election in 2012.

Are presidential elections more important than the elections of the mayor? What about the slogan "Change Russia, start with Moscow," which was the slogan of Mr. Navalny?

Sergei Kiriyenko scored the same in the elections of 1999 as Navalny did in 2013. In fact, there are no changes - the number of votes for liberal candidates remains the same.

Yet, Navalny's campaign was very aggressive. That is, he was able to mobilize their supporters.

The supporters of interim mayor Sergei Sobyanin were confident of his victory. Many of them did not go to the polls. In addition, many Muscovites preferred to spend the day out of the city. Either way, Sergey Sobyanin wins in the first round.

One of the main results of the Moscow elections is as follows: one does not need to resort to manipulation to prove the legitimacy of the authorities. The result of Sergei Sobyanin is a little more than 51 percent.

Another result - some things seem to remain the same. Those who are now outraged about the outcome of the vote on blogs, did they appeal to the Electoral Commission and the prosecutor's office regarding the alleged violations? Yes or no?

Alexei Navalny, as it turned out, did not come up with anything better than to follow in the footsteps of Viktor Yushchenko. Judging by his reaction, he can not lose with dignity.