Russians to proudly poison themselves with their own GM food 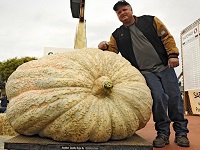 Russia is preparing to catch up with the world in the production of genetically modified food. Measures for the development of biotechnology and genetic engineering are laid out in the road map developed by the Ministry of Economic Development. Officials hope to reduce imported biotechnology and increase the presence of the Russian Federation in this promising market.

Today, the share of Russia's participation in the rapidly developing but highly controversial biotechnology segment of the market is less than 0.1 percent. Meanwhile, analysts do not doubt the prospects of this trend. According to their projections, by 2025 the world market of GMOs will reach $2 trillion. According to Russian officials, by that time Russia will fully establish its own production of genetically-modified foods to get a larger piece of this pie.

According to the industry experts, today China provides the most serious funding for GMO research. Germany and France are also focusing on the development of biotechnology, and so do Italy and the United States, albeit to a lesser extent. Interestingly, even for Germany, whose government is "preaching" environmental values ​​and maintaining appropriate policies, the development of GMOs does not raise questions. Meanwhile, the vast majority of people in Russia is still convinced of the disastrous effect of genetically modified foods on human health. Experts in the field of science and technology industry do not share these concerns.

"Food industry representatives have long known that no sausage can be made without soy, it is impossible - it will be tasteless, ugly, and so on. So the future of humanity, of course, is in the increase of the production of food products, including through GMO," Vladimir Rudashevsky, deputy chairman of the RSPP Committee on industrial policy and the regulation of natural monopolies and the deputy chairman of the Committee  for Scientific and Technological Innovation and high technology told Pravda.Ru. "I think there is a lot of false information on how bad it is. We remember from history that at one time (100 years ago, probably) it was believed that it is impossible to use additives that are widely used now. 300 years ago people could not use pepper - it was thought that it was a deadly poison. This is not the first such experience for the mankind. There is a great deal of bias against everything new (especially with regard to food."

According to Rudashevsky, it is the development of GMOs that allows manufacturers to fully control food, which is nearly impossible in the current state of affairs. A biologist and scientific expert of Pravda.Ru Anton Evseev agrees with this opinion: "As for the stir caused by many media outlets about the danger of the GMPs (genetically modified plants), everyone who writes about it forgets one simple thing - genetic modification is a natural process that occurs in nature several times a day. In fact, people adopted the idea of ​​genetic modification from microorganisms. Symbiotic and parasitic bacteria and fungi as well as viruses are constantly introducing its DNA into crops. We then eat these natural GMO foods and nothing bad happens to us, we do not die and do not mutate. Moreover, if we look at the problem from this point of view, the process of artificial modification is much more secure than the natural one. We know exactly what scientists are introducing into the plant genome, but never know for sure what the bacteria "stuffs" the plants with. I think we can all agree that a controlled modification is always safer than uncontrolled. "

"Without developing our own market, we are giving in to the overseas markets, but here lies a great danger. GMOs coming from China and India, I think, are not as good as we would like, because that's where the technology for these products is poorly controlled. We cannot reject them, so the only way to stop it is to develop our own industry based on the principles of good faith, and we have a perfect scientific basis for this," noted Rudashevsky. He added that Pushchinsky State Science and Research Institute and the Institute of Nutrition used to be involved in this type of work.

According to the expert, the approved road map should attract foreign researchers who for one reason or another are not allowed to work on the development of biotechnology in their country. Provision of a platform for the new developments will help Russia to take a fundamentally new spot on the world stage. However, according to scientists, the creation of food through genetic modification is justified not only from the economic point of view.

"Before we talk about the benefits of using GMPs often called GMOs, we must remember how selection occurs. For example, we want to create a frost resistant plum. As a result, poor breeders have to first make a few hundreds of crosses between different varieties with relatively high frost resistance. It is great if a dozen of them are good and in the second and third generation can show the same characteristics. But there is more to it. Then there is a long period when the growth and development of the selected varieties is carefully observed. Any change in genotype in principle destabilizes it, therefore the so-called frost-resistant plums may be more susceptible to disease, would require a certain type of soil, etc.," noted Anton Evseev.

Even if the new variety is developed, it has to be monitored for a long time to ensure that it does not degenerate in 4-5th generations, as it often happens. The attempts to avoid this constitute a long and financially costly process. "But all of this can be avoided if the plant is injected with the desired gene. The monitoring period in this case is reduced, and the procedure is simplified. There is no destabilization of the genome, and the plant does not acquire negative qualities along with the positive ones. As a result, it is more efficient, and most importantly, less costly," concluded the biologist.