Russians dream of strong Russia, equal for all

Most Russians define the concept of "social justice" as equality of all before the law and the absence of the poor and the rich. The number of those, for whom strong state and order is more important, exceeds the number of those, who put emphasis on democracy and freedom, twice. These are the results of a survey conducted by the All-Russian Public Opinion Research Center (VTsIOM). 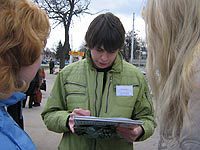 According to these data, 36 percent of Russian citizens understand social justice as equality of citizens before the law. This response remains most popular one in all studies that have been conducted on this topic since 2005.

For 20 percent of those surveyed, social justice implies more or less the same level of the standard of living for all, excluding the rich and the poor.

The number of those, who associate this notion with an opportunity for everyone to achieve whatever they deserve, is noticeably smaller (13 percent). Another 12 percent believe that the position of each member of society is determined by their labor effort.

Fifty-eight percent of Russian citizens understand this term as a strong state, order and the protection of national interests. This is a common position among residents of small towns and villages (60-61 percent), as well as older respondents (62 percent).

It is worth noting that the number of supporters of democracy, compared to 2007, has increased by five percent. However, the figure was 33 percent in 2004.

The number of those, who support the idea of ​​a strong state as compared with the data from six years ago, has also increased (it was 55 percent in 2007). In 2004, 55 percent of respondents supported law and order, while the peak was reached in 2009 - 61 percent.

"Today, we  have a curious picture. It is possible to assume that it was older people, who could be regarded as advocates of material equality. Today, the trend is moving towards young people," the Head of Social and Political Studies of VTsIOM, Stepan Lvov, told Pravda.Ru.

"Young and elderly Russians support this thesis that excludes both the rich and the poor. Middle-aged generation are not so supportive of this position," - said the expert.

Research polls by VTsIOM show the variety of interpretations of the concept of "social justice," said the Head of the Department of General Political Science of Higher School of Economics, Leonid Polyakov said. "So when politicians use the term, one should take into account how broad it can be," said the analyst.

When such terms are used without any specifications involved, it may very often happen that one persons says one thing, but the one, who is listening, understands completely another. "This variety of interpretations is natural for any society, yet we must take into consideration that we can mean different things," said Leonid Polyakov.