Is there equality in the nuclear club?

Russian President Vladimir Putin considers it impossible to break the balance of strategic deterrence and decrease effectiveness of Russian nuclear forces. In general, Russia, of course, agrees with the need to reduce strategic weapons. Yet, the Russian administration believes that all other members of the nuclear club should do the same, without exception. 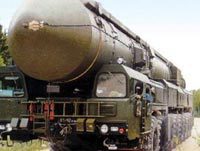 At a recent meeting on the prospects of the state defense order and the implementation of arms programs before 2020, Vladimir Putin said that nuclear disarmament should not cause damage to the defensive capacity of the country.

In addition, non-nuclear high precision weapons continue to develop in the world very actively.  The countries possessing such new weapons can significantly increase their offensive potential. Why should Russia disarm, in fact, unilaterally?

"We can not allow the balance of the strategic deterrence system to be broken. Therefore, the establishment of military and space defense will continue to remain one of the key areas of military construction," Putin said at the above-mentioned meeting.

The President reminded that by 2015, Russian aerospace defense troops should have not less than a half of state-of-the-art weapons, and in 2020 - 70 percent. Vladimir Putin also noted that the potential of aerospace defense forces was increased with the help of Voronezh-M and Voronezh-DM radar stations. In addition, Russia has passed into service Panzer-S anti-aircraft missile system and continues serial supplies of S-400 air defense missile systems to domestic troops. To crown it all, Russia continues working on the S-500 system that will be able to solve combat tasks in near space.

U.S. President Barack Obama has recently put forward an initiative to reduce American and Russian strategic offensive arsenals by one-third. He also suggested Europe should cut tactical nuclear weapons as well. Apparently, Obama's initiative made Putin make a statement on the creation of equal conditions for the disarmament of all countries of the nuclear club.

Many military analysts, both Russian and Western ones, believe that Obama's initiative is pretty crafty. The US continues to drag Russia deeper in the process of further and very rapid nuclear disarmament. This process is totally unacceptable for Russia.

"We can not negotiate with the United States indefinitely on the reduction and limitation of nuclear weapons bilaterally, while a number of other countries continue to expand their nuclear and missile potential. The process of disarmament should become multilateral," Deputy Foreign Minister of Russia Sergei Ryabkov said.

The first treaty on the reduction and limitation of strategic offensive arms (START) between the USSR and the USA was signed in Moscow on July 31, 1991. The document stipulated the reduction of the total number of intercontinental ballistic missiles, submarine-launched ballistic missiles and strategic bombers to 1.6 million units for each country, whereas the number of nuclear warheads should not exceed six thousand units.

Nowadays, politicians and military analysts admit that the START-1 treaty was a one-sided contract for Russia. Why the Russian side signed the treaty is a different story.

The author of this article personally witnessed the results of that contract. Russia had to destroy nuclear submarines of new projects, primarily strategic subs with ballistic missiles, for the money of foreign "partners."

In Severodvinsk, for example, the United States funded the construction of a large complex to recycle submarines. As soon as the vessels were destroyed, the funding from the West stopped immediately. Now Russia has to invest heavily in the construction of another nuclear fleet ...