What a joke: USA to sanction Russia for human trafficking

The USA may single-handedly introduce sanctions again certain countries over the growth in the volume of human trafficking and the failure of many countries to successfully deal with the problem. Russia risks to find itself on the "black list" as well. The U.S. State Department described Russia highly negatively at this point in its latest report on modern human trafficking. Russian officials were angered by the fact that the Americans tell them what to do. 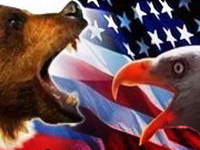 "Instead of a thorough and objective analysis of the causes that lead to the growth of human trafficking, including on the territory of the United States, the authors of the report again used the unacceptable methodological approach, which divided countries into rating groups depending on political sympathies or antipathies of the U.S. State Department," a statement from the Russian Foreign Ministry said Thursday.

The report on international human trafficking was prepared by the U.S. State Department. As for Russia, the text of the report says that there were 88 traffickers detained around the world last year owing to the joint work conducted by U.S. and Russian law enforcement officers. However, the USA could not help lecturing Russia. According to the authors of the report, Russian special services are not always willing to cooperate in the field of the struggle against human trafficking. The Russians could be more active, the report said. As a result, the USA downgraded Russia on the ranking of the countries that struggle against modern slavery. Previously, Russia was ranked in the second group of the "control list" - 188 countries indicated in the report were divided into three groups, depending on how successful their struggle is.

In the worst group, as the "stronghold of global democracy," the United States, sees it, the Russian Federation was companied with Algeria, Congo, Equatorial Guinea, Eritrea, Kuwait, Libya, Mauritania, Papua New Guinea, Saudi Arabia, Sudan, Uzbekistan and others, including China, Cuba, North Korea, Iran and Syria.

Predictably, the Russian Foreign Ministry was outraged with "democratizing tools" and "mentoring" of the United States.

"We are not surprised by the fact that in the current report, Russia was included in the category of "worst offenders" that deserve punishment from the United States in the form of sanctions (specified in the U.S. law from 2000 "On the protection of victims of human trafficking"). This fits into the logic of the recently enacted "Magnitsky Law" and other democratizing tools that the U.S. authorities have been trying to apply against Russia in connection with the allegedly growing pace of human rights violations in Russia," a statement from the Foreign Ministry of the Russian Federation said.

Russian diplomats acknowledge that their American counterparts had repeatedly warned them that Russia could be included into the third group and therefore proposed to follow certain recommendations.

"The Russian authorities will never be guided by the instructions developed in another country to struggle against organized crime. ... We have repeatedly told our U.S. counterparts that we were willing to continue constructive contacts ... without mentoring, though," officials from the Foreign Ministry of Russia said.

As for the possibility of applying sanctions against Russia, "the very posing of this question is outrageous," added the Ministry. Russia would take adequate measures in return to unfriendly steps.