On Tuesday, June 11th, members of the lower house of the Russian parliament discussed in the second and third readings a bill to ban the propaganda of non-traditional relationships to children. As a result, the bill was accepted with 436 deputies voting in support of the bill and one abstained. 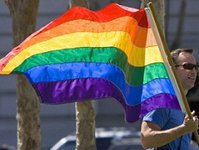 In the morning, supporters and opponents of the bill came to the building of the State Duma. There were clashes, and the police had to disperse the activists. Three dozen people were arrested.

In the second reading the term "homosexuality" was dropped from the bill. It was replaced with "non-traditional sexual relations." Propaganda of such relations to minors is subject to a fine of four to five thousand rubles for citizens, and 40 to 50 thousand rubles for officials. Sanctions for legal entities are doubled from 400-500 rubles to 800,000 - one million rubles, with the possibility of a suspension of administrative activity for up to 90 days, ITAR-TASS reported.

The bill also provides for liability for foreigners implicated in the imposition of non-traditional family values ​​on Russian children. The penalty will be four to five thousand rubles with a possibility of administrative detention for 15 days and subsequent deportation from the Russian Federation.


If the offense is committed with the use of the media or the Internet, the penalty increases to 50-100 thousand.

The bill was considered in the first reading on January 25th of this year. 14 Russian regions have previously adopted similar laws.

Possible prohibition of propaganda of non-traditional relationships has caused a strong reaction among Western human rights organizations and formal structures of the EU and the U.S., calling on the Russian authorities not to pass the law. In fact, it was presented as an infringement upon the rights of homosexuals. Of course, the law does not provide for interference with private life.

Meanwhile, according to sociologists, currently the vast majority of the Russians (88 percent) support the ban on the propaganda of homosexuality. Seven percent oppose the initiative, according to a statement on the website of All-Russian Public Opinion Research Center (VTsIOM).

A relative majority of Russians today believe that non-traditional sexual orientation should be punishable as a criminal offense (42 percent). In 2007 the number was only 19 percent.

Twenty-five percent of respondents currently believe that homosexuality should be condemned (in 2007 it was 18 percent). Some propose a fine (the number of proponents of this measure increased from 12 percent to 15 percent). Fewer people believe that the government and society should not interfere with it, because it is a private matter (from 34 percent in 2007 to 15 percent in the current year).

The results of this survey match those of the American Research Center Pew Research. According to them, the level of social disapproval of homosexuality in Russia is 74 percent.

During the period from 2007 to 2013, a decrease in tolerance to the representatives of the Russian LGBT community was recorded from 20 to 16 percent. It would be wrong to blame these results on the "government propaganda," because the authorities began paying attention to the issue only a couple of years ago. In addition, exactly the same decrease in tolerance was recorded in European countries. In the Czech Republic and Poland, for example, it was three percent, and in France - six.

A TV host Petr Tolstoy believes that such a law is a necessity. "It's about protecting our children from the propaganda of something outside of the norm. A general concept of the norm and the lack thereof is extremely important for the life of any society. And in our society, I think, the majority does not want their children to depart from the norm," he told Pravda.Ru.

"The law is absolutely normal; it does not infringe upon anyone's rights, despite a not very clear hysteria of some characters. Basically, it once again makes it clear that our country will not adopt any European experience, which many believe to be progressive. At least in regard to our historical traditional values, ​" said the host.

"Of course, everyone should have the right to choose, every person is free, but there is a certain social norm that must be understood and respected. This is what I think the law is about and I think that its adoption does not infringe upon anyone's rights," Petr Tolstoy concluded.