Who pays "puppets" without borders to slander Russia?

Reporters Without Borders Calls Putin a Predator and Control Freak - Mikhail Doubik, Publisher at Vedomosti is the director of the Moscow Times. Vedomosti was conceived by Financial Times and The Wall Street Journal, the One Percent.  The "news" outlet which calls itself the Moscow Times today published an article with this headline: 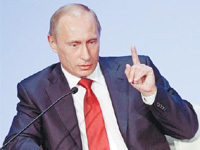 As you have probably already guessed, I am exposing the sources of such accusations, to weaken their credibility and to show how politically motivated and shallow they are. In fact in this case I will not even read the article. What we have achieved already is exposed the fact that "The Moscow Times" is funded by Wall Street in New York. That is not a good start. Here we are to believe that we are reading the unbiased truth and yet they are not even being honest about who they are really working for, nor regarding their real motives. In fact their website looks a lot like Pravda.

Sneaky huh? Personally I think that the President of the Russian Federation, Vladimir Putin, should crack down on such foreign funded disinformation agents. Now, hang on a minute...

Max Keiser used to work at Goldman Sachs and shares the same anecdotes as other disgruntled staff who have since moved on. Apparently Goldman Sachs call clients "victims". Max Keiser doesn't mince words and is emphatic that "Wall Street are scum!" Have we all worked that out by now? So what is "Moscow Times" then?

So let us now move on to disembowel this beast called Reporters Without Borders.

Firstly their website features the leaders of Iran, Russia, China, North Korea and Syria giving the finger (to reporters I guess). Oh I see what they are getting at. Check out this debt map.

See how the US, Australia, Spain, England and Canada are in a lot of debt to Russia, Libya (this is a few years old), Iran and Venezuela. Perhaps these tyrants dare give the finger to Wall Street? Perhaps the correct decorum would be to say "Come Wall Street, Oil Companies, Big Pharma and their Military Industrial Complex. Walk all over us. Steal our resources. Mire our economies in debt. Allow bankers to run our "democracies"!

Reporters Without Borders was founded in Montpellier in 1985 by Robert Ménard, Rémy Loury, Jacques Molénat and Émilien Jubineau.

Robert Ménard claimed that the use of torture could be justified in some circumstances in an interview, causing much controversy at the time.

Robert Ménard and Reporters Sans Frontières have received financing by the US Department of State to spread propaganda against Cuba.

Robert Ménard also has been involved in activism against China regarding Tibet. The Dalai Lama was in the pay of the CIA for many years, for his own needs and even more to supply arms to fight the Chinese. Hence the Nobel Peace Prize for "Compassion". Oh another one bites the dust. I'm so sowwy. Weewy. The Dalai Lama's Tibet was a cruel feudal system in which a large percentage of the population were slaves.

In 2012, Reporters Without Borders receives the "Club Internacional de Prensa" Award, in Madrid. Who are they? Let us go there shall we?

Club Internacional de Prensa have a website and it takes a minute to find out that the Chairwoman Carmen Enriquez was correspondent to the Spanish Royal Family. There is also a Message from His Majesty King Juan Carlos I. King Juan Carlos I was involved in a scandal during the Global Financial Crisis, spending a fortune shooting elephants in Africa. He was been involved in numerous affairs and his poor wife Queen Sofia leads an unhappy life. Obviously freedom of expression and dignity does not extent to women and animals. He is also a member of the Catholic Order of the Golden Fleece which includes Sarkozy and the Queen of England. We can be forgiven for suspecting that this order has a lot to do with Imperialism, Colonisation and stealing other countries resources.

Spanish Royal Family members, quite close to the throne have recently been charged with serious cases of fraud.

In 2009, the Roland Berger Human Dignity Award is won by Reporters Without Borders.

Roland Berger is a Board member of Deutsche Bank, accused of money laundering, the Blackstone Group, affiliated with the Stanford Ponzi Scheme and Fresenius pharmaceuticals who were part on the dialysis fraud scandal in the US in 2000.

The same year, Reporters Sans Frontières receives the "Médaille Charlemagne" for European Media. Their website suggests that they are simply affiliated with the likes of the BBC, infested with paedophiles.

In 2008, The Arab American Institute Foundation presented Kahlil Gibran Awards to Reporters Without Borders. Hon. George Salem is the Chair of The Arab American Institute Foundation. George Salem played a key role in  the Reagan-Bush '84, Bush-Quayle '88 and Bush-Cheney '00 and '04 campaigns and we all know about failed and brutal US Arab Diplomacy. But they like Reporters without Borders. Perhaps journalistic freedom is more about presenting the world view of the American Military Industrial Complex?

In 2006, the Academy of Television, Arts and Sciences (United States), granted an International Emmy Award to Reporters Without Borders for defending freedom of expression. So these people are mainstream media, who as we know have only a tenuous grasp on the truth.

Reporters Without Borders also received the Antonio Asensio Prize for freedom of expression presented by the King of Spain. So here we have Don Juan again, whom we covered earlier.

Reporters Without Borders won the European Parliament's Sakharov Prize in 2005 for "Freedom of Thought." Yeah right the EUSSR giving prizes for that.

This same year, the organization receives the prize "pour la Tolérance" Marcel Rudloff. Marcel Rudloff was a Knight of the Order St. Gregory which he shares with paedophile Jimmy Saville. Marcel Rudloff may have been decent himself (although, as you can see I have found skeletons every time), but unfortunately the award itself is from the Council of Europe.

Recently Britain is set to pull out of the "discredited European Convention on Human Rights that has allowed dangerous criminals and hate preachers to remain in the UK".

There are two more awards to mention, however they look suspiciously like the one just mentioned.

In 1997, the Parliament Assembly of the OSCE (Organization for Security and Co-operation in Europe), awards Reporters Without Borders the "Journalism and Democracy" Prize.

In 1992, Reporters Without Borders receives Lorenzo Natali Prize, awarded by the European Commission for defending Human Rights and Democracy.

So after all that I haven't even read "Reporters Without Borders Calls Putin a Predator and Control Freak".

You too can read the Western media and NGO do gooders like this. It doesn't matter what they are saying about the President of the Russian Federation Vladimir Putin. What matters is who is paying them to say it and just how evil these puppet masters really are.