Yekaterinburg and the World Expo 2020

Yekaterinburg is one of Russia's traditional industrial cities, located almost exactly in the vast country's centre, thus reflecting its European and Asian parts, situated at the divide of both continents in the Ural Mountains, 1.670 kilometres east of Moscow. The city of 1.350.000 inhabitants lies on the Iset River, surrounded by hills and small lakes. 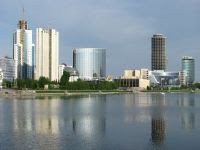 In November 2012, Yekaterinburg bid to host the World Expo 2020. The area intended for constructing Expo facilities covers 500 hectares between the airport and the city. Some pavilions already exist, as various exhibition events have already been held in these venues.

Yekaterinburg is the industrial centre of the Ural Federal District and the administrative centre of Sverdlovsk Oblast. From 1924 until 1991, the city was named Sverdlovsk, after the Communist Party leader, Yakov Mikhailovich Sverdlov (1885-1919).

He was born in Nizhni Novgorod and became involved in the 1905 Revolution, supporting Vladimir Ilyich Lenin (1870-1924). After the 1905 Revolution had failed, Yakov Sverdlov was arrested and spent the years until 1917 either in prison or exile.

From 1914 to 1946, he lived in exile in Turukhansk, Siberia, together with Joseph Stalin. After the successful 1917 Revolution, he was elected to the Central Committee and played an important role as Vladimir Lenin's close ally.

Yakov Sverdlov died in 1919, during a flu pandemic, and was buried in Moscow in the Kremlin Wall Necropolis. In 1924, the city of Yekaterinburg was renamed in his honour, where a statue keeps his memory alive.

Today, Yekaterinburg is a centre of Russian machinery industry, metal processing, ferrous and non-ferrous metallurgy. It is also a centre of commerce and trade, especially with the new Yekaterinburg-Centre. This commercial centre covers 400.000 square metres.

The Iset Tower is the Yekaterinburg-Centre's landmark, with a height of 140 metres. The first class office building of 38 stories also contains boutiques, convention centres and restaurants.

Ural Airlines has its main office in Yekaterinburg. The airline operates domestic and international flights out of Koltsovo International Airport. The fast developing airlines transported 3.5 million passengers in 2012, and received the National Aviation Award, Wings of Russia, fourteen times.

Koltsovo International Airport is located 16 kilometres southeast of Yekaterinburg. It began as a Soviet military base in 1928. In 1934, it was converted into a civilian airport and acquired its international status in 1993. Today, Koltsovo is Russia's 5th largest airport.

Ural Airlines actively promotes the bid of its home city for the World Expo 2020. In November 2012, the airlines placed the logo on its passenger planes, "Yekaterinburg World Expo 2020 - Candidate City."

In January 2013, the Moscow GUM department store hosted an interactive presentation of Yekaterinburg to support the city's 2020 World Expo bid. The Governor of Sverdlovsk Oblast, Evgeny Kuivashev, pointed out that Yekaterinburg would be an ideal venue, due to its high level of business and cultural activities.

GUM also showed a mock-up of the future Expo-Park. If Yekaterinburg hosts the Expo, it will receive visitors from 250 countries. About 32 million people will come within a period of six months.

The city of Yekaterinburg was founded in 1723 by Vasily Nikitich Tatishev (1686-1750) and Vilim Ivanovich de Gennin (1676-1750). The two founders named the place after Tsar Peter the Great's wife, Yekaterina. In 1796, Yekaterinburg was granted town status.

Vasily Tatishev was a Russian ethnographer and historian. He wrote the first volume of Russian history. Vilim de Gennin was a Russian engineer and military officer. He specialized in mining, metallurgy and also wrote a book, "Description of Ural and Siberian Factories." A bronze statue of the two founders is located on a square near the Iset River in Yekaterinburg.

In the 1930s, the Soviet Government developed Sverdlovsk (Yekaterinburg) as a centre of heavy industry. During this period, Uralmash was built, a heavy machine production facility of the Russian engineering corporation OMZ. Uralmash is the short form for "Urals Machine-Building Plant."

It began operations in 1933, manufacturing blast furnace equipment, cranes, presses, rolling mills and sintering machines for the mining and metallurgical industries in the Urals and Siberia.

In 1992, Uralmash became a joint stock company, and in 1996, a part of OMZ, one of Russia's largest engineering corporations. OMZ stands for "Uralmash-Izhora Group." OMZ manufactures steel, components for nuclear power plants, petrochemical and mining utilities. OMZ headquarters is situated in Moscow.

In November 2012, a decision will be made, which city of the world is to be the host of the World Expo 2020. Yekaterinburg has another strong competitor in one of the BRICS countries: Sao Paulo in Brazil. Of course, the citizens of Yekaterinburg hope that their city will be chosen, since it would boost their economy, infrastructure and tourist industry enormously.

Arkady Chernetsky, a member of Russia's Federation Council, thinks that "Of all the candidate countries, we have the best climate for holding such an event. We have a warm, but not hot summer. We also have a very stable social climate. There is consent between the local, regional and federal authorities."

The key advantage of the Urals, however, is its population, according to Arkady Chernetsky, "The city of Yekaterinburg is one of the youngest cities of Russia. There are lots of students, almost 200.000. We have creative student organizations."

Furthermore, he reminded his audience of the Urals' role in the Great Patriotic War, "We also offer powerful scientific and technical potential. In the past, the defence capabilities of our country depended on the people who live and work here."

The Ural Federal University is a research and innovation centre of the region, in close cooperation with the Russian Academy of Sciences, Ural branch. The university has adopted the motto, "Think, act, achieve!" It was established in 1920. Today, 57.000 students are enrolled, 650 of them doctoral students.

The Ural Federal University is one of Russia's best research centres in the fields of art, economy, humanities, natural sciences and social studies. It offers 120 BA and 80 MA programmes. This university is connected in the network "University of Shanghai Cooperation Organization (SCO) and "University of CIS."

The Ural State University of Railway Transport was founded in 1953. It prepares 10.000 students to become specialists for railway transport in the Urals and Siberia. The Ural State Law Academy, founded in 1931, is one of the largest law schools in the Russian Federation, a prestigious university, which won the Gold Medal, "One hundred best Russian Universities," in 2004.

The Urals Academy of Architecture and Arts was founded in 1947. Today, it has 20 chairs, six departments and two institutes, the Institute of Visual Arts and the Institute of Urbanism. Since 1992, the academy publishes the scientific journal, "Architecton: Proceedings of Higher Education."

The Urals Mussorgsky State Conservatory is the musical university of Yekaterinburg, established in 1934. Some of its alumni became famous Russian opera singers, most notably Yuri Gulyayev and Borish Shtokolov. Yury Alexandrovich Guyayev (1930-1986), who sang at the Bolshoi Opera in Moscow, was named People's Artist of USSR in 1968.

Boris Timofeyevich Shtokolov (1930-2005) became one of the greatest Russian basses of the 20th century. He worked as soloist at the Mariinsky Theatre in Leningrad (Saint Petersburg) and was also a well-known theorist of opera singing, including breathing techniques. In 1955, he published his book, "Burn, burn, my star: How to sing."

The Russian conductor, Evgeny Vladimirovich Kolobov (1946-2003), graduated from the Yekaterinburg Conservatory as well. Between 1974 and 1981, he conducted the Yekaterinburg Opera, and from 1982 to 1987, the Stanislavsky and Nemirovich-Danchenko Musical Theatre in Moscow.

In 1991, he founded the Novaya Opera Theatre in Moscow, which he led as artistic director until his death. Evgeny Kolobov was the first opera conductor in Russia who staged Modest Mussorgsky's "Boris Godunov" in the original version and Mikhail Glinka's "Ruslan and Lyudmila."

In the Nevyansk Icon Museum of Yekaterinburg, visitors can see 300 icons, dating from the 18th to the 20th century. The Shigir Collection exhibits the oldest wood sculpture of the world, the Shigir Idol, about 9.500 years old.

Last, but not least, Yekaterinburg became famous as city of the first BRIC Summit, held on the 16th of June 2009, with Hu Jintao from China, Manmohan Singh from India and Luis Inácio Lula da Silva attending. South Africa had not yet joined BRICS at that time.

Thus, Yekaterinburg could be named the "cradle of BRIC(S)," where Brazil, China, India and Russia inaugurated their cooperation in the fields of economy and humanitarian issues. Today, these four countries produce 15 percent of the world's gross domestic product and hold 40 percent of the global gold and hard currency reserves.

The four economies are predicted to become the world's dominant economies by 2050. There could surely be no better way to celebrate this than at the World Expo 2020 in Yekaterinburg.