How could Russia react to USA's aggression against Yugoslavia?

"We should have considered the issue of the American aggression against Yugoslavia in the Security Council, and to should have created a court together with other countries. Clark and Albright should have been held criminally responsible," said Colonel-General Leonid Ivashov. He talked about this issue in an interview with Inna Novikova, chief editor of Pravda.Ru. 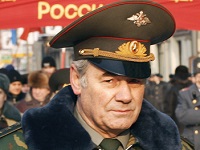 "Mr. Ivashov, you said that under the modern doctrine we gave up the idea of attack and decided to focus on defense. It is my understanding that when the events of 1999 took place in Yugoslavia, we then decided that we had to stay home and protect our own garden? After all, this was the first time when the Americans realized that they could do whatever they wanted. You, too, were involved in these events."

"We have, in fact, deployed that battalion to Pristina. We planned to deploy three battalions there, and with this one, we planned to make a forced march, and enter Kosovo's Mitrovica. We made military decisions without even informing our Foreign Ministry."

"In the end, you made the legendary forced march, and what then?"

"In order to win, you need to deepen the formed breakthrough. We, the military, have created preconditions for strong political and diplomatic offensive. We took a key area and did not let the Americans there and they crawled on their knees to negotiate, beg us. That's it. Then politicians and diplomats had to build on this success. The first thing they should have done is introduce the issue of aggression in the Security Council."

"But this was a real aggression."

"Yes, it was aggression. According to the UN Charter, it is a violation of international peace ... We should have created a court together with other countries of the Shanghai Cooperation Organization to bring to justice Clark and Albright."

"Why did it happen?"

"You know, we kept acquiring allies, we had to solve military problems. We were not just sitting in Pristina, and in agreement with the Serbian leadership we were ready to bring a number of units there to increase our presence. That is, politics, diplomacy and the military had to go on the offensive."

"It looks like this was it. I understand that we had to develop and maintain. I assume they cursed you, too."

"[We] lost and [were] betrayed. Why am I talking about betrayal? You know, Gorbachev, Shevardnadze, they were hiding from us, from the military, from Marshal Akhromeev especially, and tried to whisper with the Americans. John Baker, former U.S. Secretary of State, writes about it ... And they started playing behind the country's back on the side of the Americans, even on matters of strategic weapons."

"[They wanted] to please the United States and get transatlantic support."

"Financial support, for their personal pockets?"

"Secondly, you know, Gorbachev, the person with limited regional experience, unable to manage large systems, was told by his advisers that it was necessary to put an end to the arms race, to reduce the army."

"That the Western Group of Forces had to be withdrawn."

"Then we'll live happily ever after. However, our general staff has long been proposing a balanced strategic arms reduction, and this process continued starting from the 1970's... Gorbachev and Shevardnadze hoped for Western aid, Western investment, especially loans. But [the West] started placing conditions, and as a result, even under START agreements, we were lagging seriously behind the Americans in terms of medium-range missiles. Well, imagine the reduction of "Pioneer" complex, a self-propelled rocket launcher with a range of 5,000 kilometers, three warheads."

"I am listening to this, thinking, what a horrific weapon humanity has invented, 5,000 kilometers [range]."

"These characteristics are equivalent to the U.S. "Pershing-2A" with the range 1800. Tow-type, dragged by a tractive vehicle, one warhead. And we, as a class, destroyed 1.5 times more missiles than Americans destroyed their primitive ones."

"The military must have been very unhappy with these decisions."

"Well, of course. Alexander Nadiradze, chief designer of the system, when shown how these complexes were destroyed, died of a heart attack. Then we began yielding Americans in START. Baker told Marshal Akhromeev and Kornienko, First Deputy Minister of Foreign Affairs, that "all the matters have been resolved, we agreed with Gorbachev and Shevardnadze." That is, they solved issues like Medvedev, for example, solved the START-3 issue. Probably, our readers, viewers remember the phrase he said solemnly, "what our experts could not agree on over six months, we have agreed on in 15 minutes." But the fact is that we just gave away the most important element. If Gorbachev and Shevardnadze gave away the entire missile system, Medvedev gave away the metric system of measurement of test launches of our missiles. Americans do not currently plan to develop ballistic missiles. We are planning several types. Our experts thought that we would agree, and exchange a launch for a launch."

"Can politicians make decisions, negotiate on issues that require special training? Can they give something away not understanding how important it is?"

"Gorbachev and Shevardnadze did just that. This is where betrayal starts. Because the Americans have a growing confidence that if they push a little, [Russia} will give away oil, gas, missiles. When leaders agree behind the country's back, there is always leverage in the form of information leak. Americans most certainly filmed it, recorded it, and tomorrow some "WikiLeaks" will publish it all. In order to avoid publishing, there will be a hint that a bad person wants to publish it. Terrified Gorbachev or someone else would say "what should I do?" [They will tell him] to do this or that and then some. And here a system of control of the ruling elite emerges, and the ruling elite becomes the main target of action of other countries and other civilizations. Install Serdyukov, push him to the Department of Defense and close your eyes ..."

"He could do some major damage..."

"Yes, he could do more damage than an army could."

"So under Gorbachev there were agents of influence. It followed from what we said, what we heard. It turns out that something similar is happening now."

"You know, every worthless person in the wrong place, in the wrong office, is an agent of influence, and even if there is criminal nonsense like in Serdyukov's case, you can destroy anything."