Congratulations to Aeroflot on its 90th anniversary

"Aeroflot history began in 1923 with the founding of the legendary Dobrolyot society. This laid the cornerstone of the excellent traditions of utmost professionalism, responsibility and concern for passengers' safety, in which the company can take deserved pride. Of course, we also remember the courage that Aeroflot's pilots and other staff have shown in difficult and sometimes dramatic situations," the congratulatory message read. 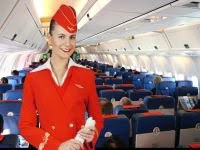 President Vladimir Putin highlighted Aeroflot's achievements. "Aeroflot today has a team of more than 17.000 people, who are all professionals in their field. It remains Russia's flagship company and keeps apace with the times, actively carrying out promising and truly innovative projects and setting high quality standards for its services. This has won the deserved confidence of millions of people in Russia and abroad."

Aeroflot is one of the world's oldest airlines, founded on the 9th of February 1923. Operations commenced on the 15th of July 1923. The founding document was signed by Vladimir Ilyich Lenin and set out the basic regulations on air transport for the Soviet Union. The name Aeroflot was given to the entire Soviet civil air fleet.

In the following years, the Communist Party of the Soviet Union drafted plans to develop the civil aviation industry in a five year plan, linking all major cities by air transportation. The expansion of air routes continued throughout the 1920s and 1930s, especially in the Soviet Far East. By 1937, the total network comprised 93.000 kilometres. In 1938, a new five year plan stressed the importance of improving airport installations. By 1940, the total air routes network had been extended to 146.000 kilometres. The longest route was Moscow - Vladivostok.

When the Great Patriotic War (1941-1945) broke out and Leningrad was besieged by the Nazis, Aeroflot flew supplies to the city. During the Battle of Stalingrad (August 1942 - February 1943), Aeroflot operated almost 50.000 missions, carrying about 3.000 tonnes of goods to the 30.000 troops. In the hard years of the Great Patriotic War, Aeroflot flew 1.5 million special missions, 85.000 of them at night. Altogether, Aeroflot carried 1.5 million men and 122.000 tonnes of cargo.

After the victory over the Nazis, the priority was to repair and rebuild destroyed airport infrastructure. In the post war years, services from Moscow to all of the Soviet Republics were further expanded to essential industrial centres and cities. In these years, the Ilyushin Il-14 became the backbone of the Aeroflot fleet. In 1947, the Ilyushin Il-12 was added. In 1948, the Antonov An-2s followed.

The five year plan 1951-1955 expanded night flights. By 1955, the yearly passenger capacity had increased to 2.5 million.  Freight and mail transport was 195.000 and 64.000 tonnes respectively. In 1956, the 20th Communist Party Congress stressed the importance of increasing Aeroflot services. The target was the carriage of 16 million passengers by 1960. The Aeroflot fleet received high capacity turbojets and turbine-prop aircraft, for example the Tupolev Tu-104 and Tu-114 jet airliners.

After the dissolution of the Soviet Union in 1991, Aeroflot underwent major changes. In 1994, it became a joint stock company, 49 percent of the shares were sold to Aeroflot employees. In the decade of the 1990s, the airline focused on international flights from Moscow. Since 2000, the domestic market has been extended again and the name changed to "Aeroflot Russian Airlines."

The company has retained its Soviet logo of the hammer and sickle with bird, which is viewed as a symbol of the airline's long and proud history. In 2010 and 2011, all regional airlines were consolidated with Aeroflot. Its main hub is Sheremetyevo International Airport of Moscow.

The fleet size is 130 and the network comprises 116 destinations. The company has adopted the slogan, "Sincerely yours," stressing the good service on the ground and aboard.

In a recent passenger survey, the new uniform of the Aeroflot flight personnel was chosen as the "most stylish" of all European airlines. The interviewed passengers said they liked the tangerine coloured uniforms of the Aeroflot air hostesses best. The colours tangerine and blue are also displayed on all Aeroflot planes. The passenger seats are covered with blue material, the head rests are tangerine.

The new uniforms were designed by a Russian fashion team in 2010. The designers, Yulia Bunakova and Evgeny Chokhlov, said that they wanted to combine a fresh, modern look with comfort and durability. Of course, the famous hammer and sickle with bird was integrated again as gold embroidered logo on the caps and the sleeves of the jackets.

"We have our own traditions and want to celebrate Aeroflot's 90th anniversary with this new uniform. It creates a tie between the generations. In summer, the air hostesses wear bright tangerine, in winter dark blue. The golden buttons on the jackets, the waistline dresses with white collars look very smart. For the men, we chose traditional dark blue again," the designers explained.

Roman Gusarov, director of Avia.ru, emphasized that all Aeroflot personnel receive special training for passenger services. They must be friendly and polite, giving guests with a warm welcome. Especially in the terminals, passengers are often nervous, because they have to wait in long lines and fill in forms. When they come on board, they want to relax. This is the time to pamper and spoil them with good food, drinks and service.

"The airline personnel are the face of the company. They are the people that passengers have direct contact with. The impression they make, their friendliness and helpfulness will make all the difference, whether customers are satisfied and want to come back," Roman Gusarov emphasized.