Aircraft-carrier 'killers' to be repaired in Russia 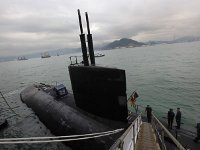 The Ministry of Defense and Zvyozdochka shipyard (Little Star) in Severodvinsk signed a contract for repair and upgrade of the nuclear submarines of the Northern Fleet "Carp" and "Kostroma" Project 945 (code "Barracuda") built in 1970s and 1980s and decommissioned long time ago. However, despite the apparent "old age" the submarines made of very expensive titanium are still superior to their foreign counterparts in terms of a number of characteristics.

According to expert shipbuilders that shared their comments with Pravda.Ru, the hulls of the titanium submarines have not deteriorated over the years. This expensive metal is very resistant to corrosion, barely rusts and does not break down over time. However, all or nearly all of the "stuffing" of the submarines will have to be replaced.

Former member of the Mobilization Department of the Navy, retired Captain of the first rank Sergey Vasyutin shared his thoughts with Pravda.Ru:

"I have no doubt that the decision of the Ministry of Defense could dumbfound even the most advanced Western intelligence. Indeed, it came quite unexpectedly even for Russian specialists. At one time, it was naval intelligence that prompted the U.S. administration which of the submarines of the Soviet Union and then Russia had to be included on the list for the disposal under the agreement on strategic arms limitation.

We, with our own hands, albeit mainly with the American money, "cut" the overwhelming number of our strategic nuclear submarines, many of which were multipurpose nuclear submarines. But the intelligence forgot about the titanic boats, considering that the country would be unable to recover them because of excessively complex and expensive "titanium" technology. Yet, these boats have survived to this day. Incidentally, the boats of the "titanium" project were built with modernization in mind, which is not true for NATO ships. These boats will still serve Russia in the ocean.

Once, these boats were called "killers of aircraft carriers." The main objectives of these submarines were monitoring of strategic submarines and aircraft carrier battle groups and the guaranteed potential elimination of the enemy at the start of the conflict.

According to the media, it is expected that the multipurpose nuclear submarine of project 945 "Barracuda" and 945A "Condor" with titanium case after upgrading will be comparable in terms of technical capabilities with the submarine project 885 "Yasen-M", that is, with the newest Russian technology."

At one time sailors feared that titanium boats would simply "devour" floating piers made of ordinary steel. The combination titanium-iron is very dangerous as iron rapidly gets corroded and degraded under the influence of titanium. However, scientists have found a way out: the case of titanium submarines when they were not in the sea was covered with special protection in the form of iron welded structures that titanium was "eating", leaving the piers alone.

So far Russia utilized only one nuclear submarine with a titanium case, the so-called "Golden Fish" of Project 661 - the first of this family, built in the 1960s. This is the speediest boat that during trials showed full submerged speed of over 42 knots. This record has not yet been broken.

None of the designers or admirals could clearly explain to the country's leadership why the submarine should "fly" across the ocean that fast. The authorities were downright terrified with the construction cost of the boat - 222 million rubles. The boat was not produced as a series.

At full underwater speed the boat made so much noise that it could be easily heard at the other end of the ocean. When the boat was cut to pieces in Severodvinsk in 2010 the cost of the disposal proved to be terrifying as well as Titanium is not that easy to cut.

During construction of "Barracuda" boats and its modifications built in Gorky (now Nizhny Novgorod), the mistakes made in the design of the construction of "Gold Fish" were taken into account. Despite the high price, the Soviet Union decided to still make a few titanium bodies, perfectly preserved over a few decades.

First icebreaker "Carp", then - "Kostroma" will be repaired in Severodvinsk and returned to the Navy. In the final period of work on the second submarine another contract will be signed - for repairs and modernization of the two other titanium nuclear submarines - "Pskov" and "New York", which are still not completely removed from the Russian Navy.

According to economists repair and upgrade of titanium submarines is approximately two times faster than building new ones. The financial costs are lower as well. In this situation it is quite ridiculous to blame the Defense Ministry of the effort to save money. In terms of certain characteristics the Russian boats of this class still surpass NATO submarines, first of all, in terms of depth. The invisibility, the main quality of any submarine, now depends on the shipbuilders and how well they will be able to "stuff" modernized boats with new equipment and weapons.

Incidentally, the strength of titanium Soviet-built submarines was demonstrated in 1992, when Russian "Kostroma" faced in the Barents Sea with the U.S. submarine "Los Angeles." The Russian ship had relatively minor damage to the exterior, while the American boat had to be decommissioned.