Killing Russian children not a tragedy for U.S.

The death of another adoptive Russian child in the United States can be a cause to the final termination of the adoption talks between the two countries. Two chambers of the Russian parliament are highly concerned about the death of Maxim Kuzmin in Texas. Russian MPs take an initiative not to let any children leave for the United States - even those, who had already been legally allowed to move. Without waiting for a legislative action, one region of Russia has already suspended adoption procedures. 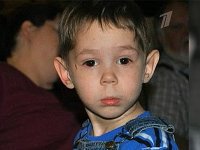 "The death of our another three-year-old child in the U.S. finally closes the question of adoption of our children in the United States. Again, the U.S. authorities are silent," the chairman of the Duma Committee for Foreign Affairs, Alexei Pushkov tweeted.

The upper house of the Russian parliament shares the same opinion. "One needs to immediately ban the adoptions of nearly 50 Russian children that have already received positive court rulings and who are supposed to move to the United States to their adoptive parents. Why do we need to send our children to their death?" Vice Speaker of the Federation Council, Svetlana Orlova told Interfax.

The vice speaker of the Federation Council also said that Maxim Kuzmin became the 20th child, who had been killed in the U.S. by foster parents.

"It is quite possible that this time the foster mother, who is guilty of the child's death, will avoid punishment, as it has happened many times before. And for the most part, we learn of violent acts committed against our children only when a child dies from ill-treatment," the senator said.

According to Svetlana Orlova, the most recent tragedy confirms that Russia was right in passing the anti-Magnitsky law.

Opening the meeting in the local administration on Tuesday, the governor said that the brother of the deceased Maxim, Kirill Kuzmin, aged 2, still lives in the foster family in the U.S.. The boy has to be brought back home to Russia, the governor said. "On our part we will create all necessary conditions for Kirill to find a family here in our region," the governor said.

Deputies of Russia's ruling party United Russia share a similar opinion. "The fact that Kirill Kuzmin continues to live with the foster parents, who are suspected of killing his brother, remains a cause for serious concerns for both the moral condition of the child and his safety," Sergei Neverov, the secretary of the General Council of the Party said.

Meanwhile, the State Duma would like to speak to U.S. Ambassador to Russia Michael McFaul, and ask him about the fate of Russian adoptees.

"We invite Mr. McFaul to come to the committee (for Family, Women and Children). Let him inform us about how and what they will do for the Russian children remaining in America," the head of the committee Elena Mizulina said.