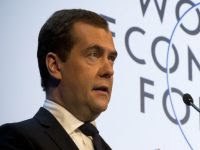 The Russian government ended a bilateral agreement it had with the United States (U.S.), for 10 years, on cooperation in security activities and combating drug trafficking and consumption, a few days after Washington pulled out of a joint commission for civil liberties.

Russian Prime Minister Dmitry Medvedev on Wednesday signed a decree dissolving the cooperation agreement, arguing that "the agreement does not comply with current realities and has exhausted its maximum potential."

Meanwhile, the Ministry of Foreign Affairs of Russia has been instructed to notify the U.S. party of the decision, as a new signal that they are currently suffering cooling relations between the two powers.

A statement from the Russian Foreign Ministry said that "the cooperation mechanism is inactive after 90 days of having communicated to the other party the intent to cancel." So far, there is no immediate reaction from the U.S. authorities.

The agreement was signed on September 25, 2002, between President George W. Bush (USA) and Vladimir Putin (Russia), with the objective that Washington will provide financial assistance to the relevant agencies to implement projects against crime, drug trafficking, money laundering and computer hacking.

The Russian government's decision comes amid deteriorating relations between the two countries, especially in human rights.

Earlier this week, Washington announced the decision to suspend its participation in the joint working group on civil society issues, part of the bilateral presidential commission, led in 2009 by Barack Obama and Medvedev, the then president of Russia.

The White House claimed that it was a protest against recent steps taken by Moscow that "restrict civil society," especially a law that prohibits U.S. adoption of Russian children, in addition to the ban on Russian NGOs to accept funding from the United States.

Previously, in 2012, Washington approved the Magnitsky Act, which introduces sanctions against Russian officials suspected of human rights abuses. The rule is named after Sergei Magnitsky, a lawyer who died in a Moscow prison in 2009.

Following the recent differences between the two States, the U.S. State Department spokesman, Victoria Nuland, announced in 2012 the intention of Washington to "cooperate directly with Russian non-governmental organizations."

Other points of contention in security between the two countries has been the conflict in Syria, as the United States is committed to fund guerrilla terrorist groups, while Russia expressed its support for the peaceful resolution of the situation.