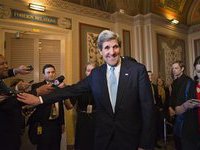 John Kerry, 69-year-old Democratic senator from Massachusetts, was appointed the new U.S. Secretary of State. His candidacy was supported by senators almost unanimously. Russian experts believe that for Russia the new Secretary of State is one of the most convenient options. At the same time, they point out that there will be no radical changes in the relations between Russia and the U.S.   Initially, U.S. President Barack Obama planned to appoint U.S. ambassador to the UN Susan Rice as Secretary of State.

However, this was prevented by Rice's reckless statements on the death of the U.S. ambassador to Libya. The Republicans said they would prevent her appointment. Barack Obama did not persist. In the end, it was agreed that John Kerry will be the new Secretary of State. There were virtually no objections to his nomination. Officially, the senator will start work on February 3rd.   In Russia, the Democratic senator is best known as a rival of George W. Bush in the presidential election in 2004. Recently the Senator supported the odious "Magnitsky Act."

Pravda.Ru asked experts to comment on Kerry's appointment to the post of Secretary of State. Generally, they do not believe that the change in the State Department would dramatically affect the Russian-US relations.  "Some changes can be expected - for the better or, more likely, for worse," said the chief editor of Russia in Global Affairs Fyodor Lukyanov. "But they have nothing to do with the appointment of Kerry as Secretary of State."  According to the analyst, the new Secretary of State, "in principle, is the most convenient of all other options." "He is a moderate, calm person, not a supporter of opportunistic politics. In this respect it is a good fit for Barack Obama's position, who believes that the U.S. should be less involved and instead engage in internal affairs," said Fyodor Lukyanov.

The replacement of Hillary Clinton with John Kerry is a positive development, he believes: "Hillary had her own - a very specific and rather negative - attitude towards Moscow."  "But, in general, it plays virtually no role in the current situation, because the relations are not getting worse, they are fading. The mutual tendency of divergence is increasing, and there is no desire to communicate. This is happening on both sides, quicker on the U.S. part, and slower, but more active on the Russian part," said Fyodor Lukyanov.

He thinks it is not linked to any specific conflicts. "We cannot say that we have profound disagreements on a particular issue that make the relationship deteriorate. This is not the case, there is nothing new going on that would cause this process. This is a growing divergence in the perception of how to live, what to do, how to solve the world's problems, how to build the government," said the analyst.  In this situation, it is not very important who serves as Secretary of State. Anyway, this person would not be able to change this trend," said Fyodor Lukyanov.

First deputy chairman of the Duma Committee on Foreign Affairs Vyacheslav Nikonov does not expect any changes either. "The mere fact of the change of Secretary of State does not indicate a change of the milestones in the American politics. Foreign policy is inertia-based," he said.

At the same time, Nikonov mentioned, in recent months Hillary Clinton made a number of steps that can hardly be considered friendly towards Russia. "There was an unprecedented statement that the U.S. would do everything to prevent the integration of the post-Soviet space. There was the "Magnitsky List," and before that there were lists drawn up only in respect of countries-outcasts," said the deputy.

"The trends have been quite alarming. Kerry is more reserved, I hope, more competent, more experienced in international affairs than Clinton," said Vyacheslav Nikonov. He believes that the future of the relations between the two countries "will depend on a number of issues that are not under control of the Secretary of State. These are the issues associated with creation of a unilateral or joint missile defense system, issue of policy on Syria, policy on Iran. These issues require decisions at a higher level than the Secretary of State," said Vyacheslav Nikonov.