At the beginning of 2012, President Vladimir Putin visited the naval base of the Northern Fleet in Severomorsk, to present the Order of Nakhimov to Russia's nuclear-powered missile cruiser, Pyotr Veliky. The Order was given for "bravery, dedication and professionalism shown by the ship's crews on their missions," the President's website Kremlin.ru informed. 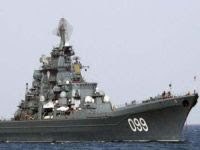 by Olivia Kroth
Severomorsk is a closed town in Murmansk Oblast on the Kola Bay of the Barents Sea. The town serves as base for Russia's Northern Fleet, with the largest dry dock on the Kola Peninsula.

The Barents Sea forms a marginal sea of the Arctic Ocean. Only the southern half of the Barents Sea, including the port of Murmansk, remains ice-free all year round. The northern half is completely free of ice only in September.

It is no easy matter for the personnel of the Northern Fleet to live and work in these extreme weather conditions. They need a sturdy disposition and strong stamina to withstand frost and ice.

The heavy nuclear-powered missile cruiser Pyotr Veliky, named after Tsar Peter the Great, is the flagship of the Northern Fleet. This Kirov class battle-cruiser has a displacement of 24.300 tonnes, a length of 252 metres and travels at a speed of 32 knots.

In September 2008, the Pyotr Veliky sailed to the Caribbean Sea, where it took part in the VENRUS-200 exercises with the Venezuelan Navy, in December 2008. Afterwards, it continued to South Africa and India, to participate in joint naval drills with the Indian Navy, INDRA-2009, in January 2009.

One month later, the Pyotr Veliky captured ten pirates in three boats near the coast of Somalia, before sailing back to its home base in Severomorsk, thus ending a six-month deployment.

Another voyage that lasted half a year began in March 2010. The Pyotr Veliky conducted manoeuvres in the Indian Ocean, together with other Russian warships from the Black Sea Fleet. In April 2010, it visited the Russian naval base of Tartous in Syria.

In his address at the ceremony of presenting the Order of Nakhimov, President Vladimir Putin said, "Today, the missile cruiser Pyotr Veliky is awarded the Order of Nakhimov. This military decoration was introduced during the Great Patriotic War (1941-1945) as a tribute to the glory, courage and feats of the sailors, who made a great contribution to the victory over the enemy."

The President emphasized, "Today, the Order of Nakhimov has regained the prestigious status of a state decoration. I see it as yet another symbol of the revival and development of the Army's and Navy's historical martial traditions."

Of course, the ship and its crew were lauded in President Vladimir Putin's speech as well, "Pyotr Veliky is a ship that is without equal in the world. Both the cruiser and its crew rightly deserve this decoration. The cruiser has repeatedly excelled in long sea missions, performed combat duty and flew the Russian flag in key strategic areas of the world's oceans. The crew has successfully carried out its missions and showed impeccable professionalism, skills and bravery."

In a short summary, the President highlighted the historical achievements of the Russian Navy. "Courage, valour and honour were always characteristic of our sailors. So it was under Peter the Great, when the Russian fleet was born and in the days of Admiral Nakhimov, the legendary naval commander and hero of the Sevastopol defence, as well as during World War I and the Great Patriotic War."

Special praise was directed at the crew. "Today, the Navy sailors here in the Northern Fleet and other fleets perform their duty with honour and make a major contribution to enhancing security and improving the defence capability of our homeland."

Pavel Stepanovich Nakhimov (1802-1855) was born in the Gorodok village of the Smolensk Governate. In 1815, he entered the Naval Academy for the Nobility in Saint Petersburg and went on his first sea voyage in 1817 on board the frigate, Phoenix. In 1818, after passing the exam to become a midshipman, he was assigned to the Second Fleet crew of the Russian Imperial Navy's Baltic Fleet.

In March 1822, he was assigned to the frigate, Kreiser (Cruiser), and took part in a round-the-globe voyage which lasted three years. Upon his return home, he joined the crew of the 74-gun warship, Azov. In the Crimean War, he helped to annihilate the Ottoman fleet at Sinope, in 1853.

During the Siege of Sevastopol, he organized the defence of the city and port, which was the home base of the Russian Black Sea Fleet. Unfortunately, he was wounded by a sniper shot in 1855 and died from the wound.

A bust of Admiral Nakhimov can be admired at the Russian Black Sea Fleet Museum in Sevastopol. Furthermore, a Kirov class battle-cruiser was named after him, Admiral Nakhimov. The Admiral, who gave his name to the Order of Nakhimov, was himself the recipient of many orders during his lifetime:

In the last part of his speech, President Vladimir Putin gave an outlook into the future. "The development of a strong and effective Navy is one of Russia's key priorities. We will consistently develop underwater and surface vessels, strengthen conventional forces and naval nuclear forces," he promised.

"In the coming years, the fleet will receive over 100 new surface ships and submarines of different classes. We are fully committed to implementing this ambitious programme," the Russian President announced.

"At present, the Russian shipyards are developing and building new ships; design centres are creating new marine technology. We are planning to build up the rate of the fleet's renewal and growth. Comrades, I am sure you will continue to serve the fleet, your country and the people of Russia," President Vladimir Putin concluded his address in Severomorsk.

With the new programme in sight, and Russian battle-ships patrolling all of the oceans on numerous peace missions, the world will surely become a safer place.