Europe sounds out opportunities for abolishing visas with Russia

Leading European politicians and diplomats continue to discuss the possibility of introducing a visa-free regime between Russia and the EU. In December of 2012, European Commission President Jose Manuel Barroso offered Russia to sign a new agreement that would simplify visa issuance. However, at the moment complete abolition of visas for Russians is not being discussed. 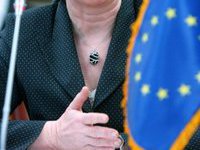 The agreement is designed to significantly simplify the procedure of registration of documents for entry into the EU. Generally, the system for issuance of Schengen visas to Russian citizens is working satisfactorily, said the European Commission President. Media quoted Barroso saying that in 2011, the number of visas issued to Russian citizens saw a 62 percent increase, and 12.5 percent of them were multiple-entry visas. This, of course, simplifies travel to Europe for Russian citizens.

If the agreement is signed, several categories of people will be able to obtain multiple Schengen visa valid for five years. This option will benefit first and foremost students, journalists, businesspeople, and representatives of civil organizations. Transit travelers and members of social organizations will be issued visas free of charge. Russia is reciprocating, and visa-free travel for ferry and cruise passengers is already functioning in St. Petersburg.

The greatest interest in the abolition of the visa regime between Russia and the EU was shown by European countries with high levels of tourism, such as Spain, Greece and Finland. Spanish resorts are annually visited by about 2 million people. In November of 2012, Spanish Ambassador Jose Ignacio Karbahal supported the idea of ​​ abolition of the EU visas for Russian citizens. He said that visas were a necessity when there were problems with migration and security, but there were no such problems involving Russian citizens.

Starting January, the procedure for obtaining visas to enter Slovakia for Russians was greatly simplified, and the time of issuance was reduced to 48 hours. Tourists and businesspeople can obtain a multiple entry visa valid for two years. After its expiration, multiple entry five-year Schengen visas will be issued. The most active negotiations on simplification of the existing visa regime are traditionally held between Moscow and Berlin. In November, an agreement was made to simplify the issuance of visas to Germany for members of youth exchange programs. In fact, young people from Russia and Germany participating in various bilateral projects have been able to obtain visas with ease for several years. According to German Chancellor Angela Merkel, in the short term, every fifth visa to Germany will be a long-term one.

This process will be facilitated by seven new special visa service centers that will work directly with the embassies of the two countries, the newspaper Russian Germany reported. This would accelerate the procedure of issuing visas to Germany, but not simplify it. It was stated that the documentation requirements and the basic rules for issuing visas would remain unchanged. However, in case of any ambiguity applicants would still have to personally contact the Consular Section of the German Embassy. The most optimistic forecast for temporary or partial cancellation of the visa regime between Russia and the European Union is the World Cup 2018 to be held in Russia.

Summing up the results of the December EU-Russia summit in Brussels, President Vladimir Putin said that all technical issues regarding the visa-free regime between Russia and the EU have been resolved, and now it was up to a political decision of the Europeans. "The ball is in the court of our European partners, I am convinced, and I think that they do not doubt it either. The agreement on readmission has been in effect for four years. All decisions about the protection of the external borders have been made," said the President.

This statement was made by the Bundestag. However, by 2018 the composition of the main legislative body of Germany will change twice, the newspaper reported. Analysts point out that in the area of abolition of visas the European Union has moved much farther than Russia. In some countries, such as Finland, Estonia, Italy, and Spain, visa centers were opened that would significantly complicate and raise the price of the procedure for issuing Russian visas: The centers charge extra visa fees and increase the period of issuing of Russian visas because of extra document processing, the newspaper reported.

It remains unclear how long dealings with all hidden and obvious differences hindering complete abolition of the visa regime between Russia and the EU would take. Most experts are moderately optimistic about the prospects for abolition of visas for the Russian citizens in the coming years. Russian media often refers to 2018, when Russia will host the World Cup, as the estimated date of transition to a visa-free regime.

Author`s name Dmitry Sudakov
*
19:01
PMC Wagner fighters entrench themselves in northern and eastern parts of Bakhmut
17:35
Death toll from Turkey deadly quake rises fast to 1,100 and counting
18:54
Ukrainian soldier uses chainsaw and fire to release US howitzer from ice trap
18:30
Onet: Ukraine will lose in six months due to shell shortage
17:36
Russian troops defeat Ukrainian troops in Zaporizhzhia region
14:50
Number of foreign mercenaries in Ukraine continues growing
14:17
Russians buy more than 50 tons of gold in 2022
13:57
Russia will not talk to Ukraine. Russia will talk to the West
13:34
USA's plan to give 20 percent of Ukraine for peace hoax
12:51
Medvedev: Ukraine as a state to be devastated, go bankrupt and be turned into colony
Armed Forces of Ukraine drop chemical bombs from drones - DPR governor