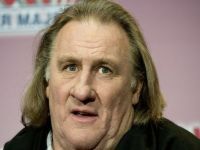 On the 3rd of January 2013, President Vladimir Putin signed a decree, granting Russian citizenship to the actor, Gérard Dépardieu, formerly of French nationality. Already in December 2012, the film star stated in public that he does not consider himself to be a French citizen any longer and applied for a Russian passport.

This is a wonderful birthday gift for Gérard, who celebrated his 64th birthday on the 27th of December 2012, probably the nicest present he received. The Russian Federation is attracting ever more stars from the West, who have moved to Russia or acquired Russian citizenship in the past years.

In 2008, the Jamaican top model, Naomi Campbell, moved to Moscow to live with her Russian fiancé, billionaire entrepreneur, Vladislav Doronin. Will Gérard Dépardieu follow in her footsteps soon? Currently, he is living in Belgium, but this might not be forever. Fitted out with a brand new Russian passport, he might decide to reside in Russia.

The Russian Federation has a very mild income tax of only 15 percent, even for very rich people, while France wants billionaires like Gérard Dépardieu to pay 85 percent of their income, which the film star flatly and categorically refused.

In his heated argument with some functionary of the French régime who called him "pathetic," he pointed out that he worked hard all of his life for what he is earning these days. And he was not born with a golden spoon in his mouth, either.

On the contrary, he stems from a poor working class family and made it to the top earners' bracket all by himself. Gérard Dépardieu is a classical self-made man. His parents divorced early, leaving the boy on his own. He remembers spending most of his childhood in the streets.

During his long and successful career, he was awarded the titles of "Chevalier de la Légion d'honneur" and "Chevalier de l'Ordre national de Mérite." Moreover, he twice won the French cineastic award "César" as best actor.

The Knight of Merit recently galloped away in fury, to Belgium, where the taxation for billionaires is much more lenient, after his unpleasant altercation with the actual French regime, which is "socialist" only by name.

In reality, this regime wants to suck up ever more tax payers' money, to fill the endless black holes of its financial disasters, after France paid for the expensive bombing of the Great Socialist Libyan Jamahiriya, helping to genocide the population and destroying the nation.

The French regime furthermore pays enormous sums of money to finance terrorists, sent to the Socialist Arab Republic of Syria, in order to terrorize the Syrian population and assassinate the Syrian President, Dr. Bashar Al-Assad.

Maybe Gérard Dépardieu does not approve of how his hard-earned millions are being abused by the French regime? Maybe the star does not want his money to be transformed into bombs and drones, killing civilians, among them thousands of small, innocent children?

Maybe he simply wants to enjoy most of his hard earned money himself and pay 15 percent taxes to the Russian Federation? If he does, who could prevent him from doing so? Nobody can, after the Knight of Merit has received his merited Russian passport from the Russian President, Vladimir Putin.

Gérard Dépardieu has always had a penchant for Russia, as he admitted in an interview with La Marseillaise, a French Communist news media. In December 2011, he told his interviewer that Vladimir Putin had helped him to make a dream come true, the dream of incarnating the Russian personality of Rasputin in a TV film, which was broadcast on Christmas 2011 by TV France 3.

The star said that he had dreamed of this project for as long as 20 years. He found Rasputin a complex and fascinating figure of world history that has been interpreted as a fanatic madman or as a mystic saint and clairvoyant healer.

Gérard Dépardieu grew up in a family of clairvoyants and healers himself. One of his grandmothers healed people with her energy. He also studied Russian history and literature. The film star loves the Russian temperament, as expressed in the novels of Fyodor Dostoyevsky and the poetry of Alexander Pushkin.

In the interview with La Marseillaise, he thanked President Vladimir Putin for opening the doors to Russia and helping him to film in Saint Petersburg. Parts of the movie were made in Tsarskoye Selo and Yusupov Palace. The last Tsar's wife, who stood under Rasputin's influence, was played by the French actress, Fanny Ardant.

In Tsarskoye Selo, some of the film's scenes showed the imperial family's former residence, now a World Heritage Site of UNESCO. In 1917, Tsar Nicolas II abdicated after the February Revolution and was imprisoned in the Alexander Palace of Tsarskoye Selo. He and his family were murdered there in July 1918.

Alexandra Feodorovna, the last Tsarina of Russia, surrounded herself with mystics during her lifetime, including the notorious Grigori Rasputin. She hoped that he would be able to heal her son, Alexei, Heir Apparent to the throne, of his bleeding disease. Tsarevich Alexei was born with Haemophilia.

Although the Tsar disliked Rasputin, he did not dismiss him. One of the ministers said, "He did not like to send Rasputin away, for if Alexei died, in the eyes of his mother, he would have been the murderer of his own son."

Some citizens of Saint Petersburg thought of Rasputin as a living prophet and saint, others judged him to be a fraud. Because he interfered in politics, he was murdered in 1916 by Prince Felix Yusupov and Grand Duke Dmitri Pavlovich.

Yusupov Palace in Saint Petersburg, where some of the film scenes were taken, was the site of Rasputin's murder. He was invited for dinner, then served poisoned cakes and wine. To be sure, the murderers shot him several times and clubbed him on the head. The dead body was wrapped in a blanket, carried outside and thrown into the Moika River.

During the Russian Revolution, Yusupov Palace was confiscated by the Soviets and later turned into a museum, just like Alexander Palace in the compound of Tsarskoye Selo.

Gérard Dépardieu not only starred in this film, but also appeared in many Russian commercials. TV watchers in Russia are familiar with his remarkable face, not to be forgotten easily. If the star moves to Russia, he will be welcomed with opened arms and shine brightly.

From Russia, with love!