During the visit of Russian President Vladimir Putin to India, the two sides signed a number of contracts that leave no doubt that the relationship between Russia and India are "particularly strategic" in their nature. 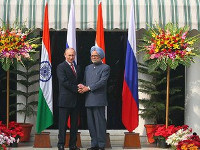 India has always appreciated the fact that the Soviet government used to recognize the independence of the country even before its official announcement. In addition, it is difficult to forget the help that Leonid Brezhnev provided to Indira Gandhi during the war against Pakistan. The USSR sent echelons of trains loaded with weapons and food, whereas the ships of the Pacific Fleet went to the Bay of Bengal to oppose the forces of the U.S. Seventh Fleet.

India, in contrast to many other "friends" would never forget this help. Nowadays, it is Indian administration that describes its relations with Russia as "very privileged and strategic."

"We deeply appreciate the strong friendship with Russia and the support that Russia gives India," said Prime Minister Manmohan Singh after the meeting with the Russian president.

"The deepening of friendship and cooperation with India is a priority of our foreign policy. And we have every reason to say that they are truly unique and privileged in nature," Putin said.

Putin wrote an article prior to his visit to India. Published in the Indian newspaper Hindu, the article focuses on the partnership within the scope of the BRICS and the Shanghai Cooperation Organization - an allusion to India's membership at the SCO.

"Our consultations at international forums, such as the UN Security Council and BRICS, have deepened during the year," Prime Minister of India said.

The two sides exchanged views on major international political issues. In advance of the planned 2014 withdrawal of Western troops from Afghanistan, Russia and India agreed to cooperate closely in the fight against extremism and drug trafficking in the war-torn country.

The leaders called upon all sides to end the conflict on the Syrian issue and take part in a dialogue to resolve the conflict by peaceful political means, in accordance with UN Security Council Resolutions 2042 and 2043 (the peace plan of six points of the former special envoy of the UN/Arab League on Syria, Kofi Annan).

Moscow and New Delhi called the sanctions of the West against Iran "counterproductive." The countries also said they favor a discussion of a comprehensive agreement on economic cooperation between India and the Customs Union of Belarus, Kazakhstan and Russia, Russia & India Report said.

As a result of Putin's visit to India, the two sides signed the contracts, which left no doubt that Russia would remain India's major partner. Both the leader of the ruling coalition, Sonia Gandhi, and opposition share this point of view.

The two countries will strive to double the turnover, which in 2012 reached $10 billion. India will build pharmaceutical plants in Russia, whereas Russia will build new nuclear power plants in India. "The negotiations on the construction of the third and fourth blocks of NPP Kudankulam have reached good progress," said Manmohan Singh.

A Memorandum of Understanding was signed on cooperation in the GLONASS navigation system between JSC Navigation Information Systems (NIS GLONASS) and Indian companies Bharat Sanchar Nigam Limited (BSNL) and Mahanagar Telephone Nigam Limited (MTNL). The document provides for the use of solutions of NIS GLONASS and the infrastructure of BSNL and MTNL for providing services in India through geopositioning and telematics using satellite GLONASS and GPS technologies.

The unprecedented level of military and technical cooperation between the countries proves the strategic partnership between Russia and India. Its essence and real content is much more positive than the assessments from Western experts, who pay attention to Russia's recent losses in tenders to French Rafale fighter jets, U.S. Apache and Chinook helicopters. However, a victory in these tenders does not guarantee actual contracts. Price, performance  and political risks can be too high to handle.

Russia found its firm place under the Indian sun through sales with the transfer of technologies and joint development and production of weapons. Russian companies take into account weather, financial conditions and the specific characteristics of the military personnel of India. Western companies can not offer all that yet. It goes about the joint production of BrahMos supersonic missiles, multi-purpose fighters Su-30 MKI, the joint development of multi-purpose transport aircraft and fifth generation "stealth" aircraft. As for the stealth aircraft, Russia and India signed a contract on research and experimental development (R & D Agreement) worth 5.5 billion dollars of investment for each party. India's Ministry of Defense announced that the first batch of new fighters is scheduled for 2022. Each aircraft will cost about a hundred million dollars; India's total cost on this huge project will make up $35 billion, says India Times.

New contracts were signed to supply 71 Mi-17V5 choppers to India in the amount of  $1.3 billion and component kits for the assembly of 42 Su-30MKI fighters worth $1.6 billion.

Russia also assured that there would be "technical problems" resolved with Vikramaditya aircraft carrier ($ 2.3 billion), which will be ready on time in November 2013, and with nuclear submarine INS Chakra (K-152 Nerpa), which India rented for ten years for one billion dollars.