The global arms market has been growing steadily during the recent years. Russian arms are in high demand on this market, and it is the weapons and equipment of Soviet development that are competitive most. Their performance is even better than that of advanced Western models for certain tasks. In 2012, the Russian Federation has topped the arms export plan. 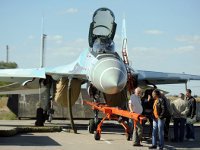 Russian (Soviet) small arms and more sophisticated equipment works smoothly and efficiently in all climate conditions. On December 5th, the Washington Institute for Near East Policy published a report, which said that Iranian pilots on Soviet Su-25 fighter jets (NATO: Frogfoot) intercepted advanced U.S. drone USAF MQ-1 Predator over the Persian Gulf. The authors of the report said that the Soviet-made aircraft was not an interceptor: it was not equipped with modern radars, but it could successfully destroy state-of-the-art aircraft, Worldtribune.com wrote.

Here is another example to prove the efficiency of Russian-made military hardware. The Pentagon was forced to recognize the indispensability of Russian Mi-17 helicopters in Afghanistan. The Pentagon even concluded a contract with Rosoboronexport (Russia's defense export giant) worth $900 million. The contract has to be approved by the US President, though, due to negative recommendations from the Congress. However, such assessments of military experts of Russia's main strategic adversary say that Russian weapons are very promising in terms of its competitiveness in the world market.

This was, in fact, announced by President Vladimir Putin on December 17 at the meeting of the commission on military and technical cooperation. Assessing the results of the year 2012, Putin said that Russia had sold arms and services worth more than 14 billion dollars (13.5 billion under the plan). The volume of new contracts made up approximately $15 billion. The president also outlined the directions, where Russia may continue its progress at this point.

First off, it goes about the joint production of military products and research developments. As an example, one can name a joint project with Serbia for the production of multiple versions of armored vehicles in the Serbian town of Velika Plana. The vehicles will be exported presumably to Kenya and Bangladesh. Not that long ago, an agreement was signed between "Russian Technologies" and Brazilian defense company Odebrecht Defensa e Technologia about the establishment of a joint venture, which, in particular, will assemble a line of multipurpose Mi-171 helicopters in Brazil.

Russian companies are involved in a number of joint projects with India, including the creation of fighter jets FGFA (based on the T-50) and Brahmos supersonic cruise missiles. China wants Russian designers to take part in the development of engines for its fighters. This will eliminate counterfeits of Russian brands and help Russia find a place on partners' markets.

The second, and perhaps the most promising direction, is "the restoration of position in the market for military modernization and repairs of hardware," Putin said. Russian defense industry companies have obtained more rights this year to conclude contracts with foreign customers. It was stated at the meeting in Sochi in early July 2012 that the export of services provided by Russian defense companies in 2011 amounted to about 2.5 billion rubles, which accounted for 18 percent of the total volume of all military exports from Russia. This year, the figures will probably be larger.

To give an example of such cooperation, one can refer to the contract with NATO for servicing helicopter fleet in Afghanistan. The contract currently goes through the signing process. A similar agreement was signed during the recent visit of Brazilian President Dilma Rousseff to Moscow. Brazil increases the fleet of military helicopters Mi-35M.

Soviet military hardware is also in demand in Africa. The continent's strongest armies of Algeria, Uganda, Chad are armed with the latest models of the T-90, T-70 tanks and Su-35M jets. Libya has recently asked the Russian government to resume military cooperation and render assistance in the modernization of the previously delivered military equipment. In particular, the new Libyan authorities are interested in the hardware that was left in the country after the overthrow of the Gaddafi regime. The country has already signed a contract to upgrade 200 T-72 tanks.

Bahrain has requested servicing a large quantity of Kalashnikov AK103 rifles. Now is the time for Russia to offer these services to Africa and Asia to maintain the park of Soviet military equipment, which the above-mentioned countries prefer for its remarkable performance in all climate conditions, as well as for its price and quality.

At present, Russian arms and military equipment are supplied to 88 countries of the world. Fifty-seven of them are regular customers. India remains the largest buyer of Russian military equipment. The country buys Su-30MKI fighters and T-90S tanks. China is the second importer. The country bought AL-31FN and D-30KP-2 aviation engines in the amount of $1.2 billion and Mi-17 helicopters worth $700 million. Vietnam comes next on the list (about $2 billion): the country purchased a submarine of Project 636 and Lightning sea boats. The numbers of contracts with other major importers - Algeria, Venezuela, Syria - have not been disclosed.

Russia's portfolio of agreements also includes a package of contracts with Iraq worth more than $4 billion. Vladimir Putin said that Russia should promote its weapons. According to him, such work "should help in the military-patriotic education of our citizens, especially young people." Indeed, for Russia's image abroad, the Kalashnikov assault rifle has done more than all our achievements combined.