Russian helicopters will not fly in Afghanistan

Russian Foreign Minister Sergei Lavrov expressed a hope that U.S. President Barack Obama will not approve the decision of the Senate to cease cooperation with the Russian defense export company Rosoboronexport. The Americans have not been able to break the Afghans of fighting with Soviet (Russian) weapons. They purchase simpler analogues in Eastern Europe, but the Pentagon decided to buy helicopters from Russia. 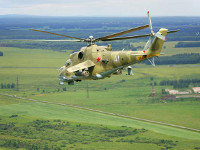 In April 2012, Rosoboronexport unexpectedly won the tender of the command of the U.S. ground troops for the purchase of military transport helicopters for international coalition forces in Afghanistan (ISAF). Five companies (General Dynamics Ordnance and Tactical System, Alliant Techsystems Operations LLS, Chemring Ordnance and Military Products, Bulova Technologies Group Inc and Arma Global Corporation) - the partners of the U.S. government - asked the Russian company to become a subcontractor to supply helicopters. The Americans buy and continue to buy Kalashnikov assault rifles and ammunition, often counterfeit, from Eastern Europe. However, they decided to go to Russia for more complicated hardware.

In May of the same year, a contract was signed for the supply of 21 Mi-17V5s choppers in the amount of $367.5 million. In June, the Pentagon announced the purchase of ten more helicopters of the same configuration. The total cost of the contract, including engineering services and spare parts, according to the Pentagon, could amount to $900 million. Pentagon spokesman John Kirby said that "the strengthening of the combat potential of the army of Hamid Karzai was a subject of tireless care and attention of all security and intelligence components of the United States. The choice in favor of Russian helicopters was dictated by military and economic feasibility, taking into consideration the fact that it is Russian Mi helicopters that are reliable in Afghanistan, just like Kalashnikovs."

However, American politicians interfered in the case. It turned out that they did not care much about the combat capability of the Afghan Army after the withdrawal of the troops. The politicians are much more concerned about the toppling of the legitimate government of Bashar al-Assad, who also receives weapons  from Russia's Rosoboronexport. On July 19, the U.S. Congress, almost unanimously (407 vs. 5) approved the amendment, which "prohibited all types of transactions and agreements with the Russian arms exporters, including the leasing of arms." On November 30th, the Senate issued similar recommendations following the initiative from Republican John Cornyn, was had been jealously watching Russian military successes.

As explained by Senator Cornyn, who recently criticized the Pentagon for the appearance of a Russian submarine in the Gulf of Mexico, "American taxpayers should not indirectly finance the mass murder of Syrian civilians, especially if there are good alternatives for purchasing these weapons through U.S. brokers." The senator is probably not aware of the fact that arms trade in Russia is a monopoly of the state, and that Rosoboronexport represents the interests of the state. Therefore, one can hardly find good alternatives through U.S. brokers.

The chairman of the Public Council under the Ministry of Defense of the Russian Federation, Igor Korotchenko said that US Congressmen and Senators seem not to understand that it is only the Russian military hardware that can operate successfully in Afghanistan. Western helicopters simply can not work under local conditions. It goes about local temperatures and the level of local skills."

Cornyn insists on the spirit of the Cold War: "To continue the business with Rosoboronexport means to continue to undermine both the U.S. policy on the Syrian issue and the efforts that the United States takes to support the Syrian people."

Does it mean that Senator Cornyn no longer supports the Afghan people? Overfilled with hatred, he does not see that by getting Mi-17s, the Afghan army receives a very important potential, which the country will need after the ISAF mission ends in 2014.

Quite on the contrary, NATO Secretary General, Anders Fogh Rasmussen is perfectly aware of that. He said on December 3rd, after the NATO-Russia summit, that the parties were discussing a new project about Russia's efforts to train Afghan specialists to repair helicopters. "We have already achieved the general agreement on this," said Rasmussen.

For Rosoboronexport, with a turnover of 11 billion dollars in 2011, the failure of a million-worth order is not lethal, taking into consideration the fact that there are many of those who want to buy these helicopters. For Afghanistan, whose army urgently needs the Russian helicopters, time is priceless. Even if Russia and the U.S. try to cooperate - in Afghanistan - the U.S. is unable to suppress the pride and insists on unpromising solutions.

Russian Foreign Minister Sergei Lavrov, speaking at the NATO-Russia Council, said that the amendment of the Senate "was not a law but a view that had not been through all necessary instances."

Representatives of Rosoboronexport said that they had not received any official information about the termination of the contract: "All will be known when the U.S. president makes a decision." Well, one can only hope for the sanity of Barack Obama.

The U.S. government sanctioned Rosoboronexport before - from 2006 to 2010. U.S. officials believed that the company contributed to the proliferation of weapons of mass destruction, selling them to Iran. The sanctions were lifted in 2010 under the Obama administration, after Russia supported UN Security Council sanctions against Iran.