"Russia is a factor of stability in the Middle East"

The Middle East remains one of the regions of crucial importance to Russia and the country has no intention of reducing its presence in this region. In the last part of the interview with the Minister of Foreign Affairs of Russia, Sergey Lavrov, at the headquarters of the newspaper "Rossiyskaya Gazeta," the Chancellor said that Russia will do everything possible to prevent the development of possible military intervention in Iran.

Rossiyskaya Gazeta: Our Western partners often say that, in consequence of the Arab Spring, Russia lost its influence in the Middle East. Do you agree with this statement?

Sergei Lavrov: We do not agree with that, because our contacts with key countries in the region have not become less intense and, in some cases, are even more active. The representatives of these countries have the pleasure of coming to Russia.  We maintain contacts with all opposition groups, including those of Syria. None of them, not even the most radical opposition, says things we hear from our Western colleagues and some politicians in the region.

However, there are other examples like Yusuf al Qaradawi, a religious man famous for throwing invectives regularly on our country through the television network Al Jazeera. But this is an anomaly. Most of the Syrian opposition, Arab countries and other contacts with whom we always start any conversation with us say that, for them, ii is very important for Russia to maintain its presence in the region. Whatever happens, Russia will continue to be considered as a reliable partner and an important factor that can ensure a geopolitical balance in this area.

Between the 8th and 10th of October this year, Moscow was visited by the Prime Minister of Iraq, Nuri al Maliki. Recently, some politicians had said that Russia would be on the "wrong side of history," referring to events in Iraq. But Russia continued to keep to its principles firmly, trying to make decisions to be taken in accordance with international law, and not for the simple reason Colin Powell has shown in the Security Council a beaker with a white powder, presented as anthrax, to persuade Council members to approve a military operation against Saddam Hussein.

At that time, we upheld the principles of international law precisely because we have not given consent for the war in Iraq which was approved by the UN Security Council. We are using the same tactics towards Syria, and we always remember the lesson of Libya, which is remembered around the world. At that time, international law was subjected to a severe test and the resolutions of the UN Security Council ended up being misleading. And look what's happening in Libya. The tragedy of Benghazi and the violent fighting of Bani Walid..

Our Western colleagues from the UN Security Council are not eager to talk about the situation in Libya, trying at the same time to persuade us to adopt a resolution on Syria. Our position is as follows: first, we must draw lessons from the experience in Libya not to repeat this colossal mistake. For us, it is an absolute axiom.

With respect to statements that we are on the wrong side of history or we lose the Middle East, all of them are nothing more than a mere mistake, an attempt to push through the desire for it to be reality and place certain political forces against us. But only marginal regional groups can be part of this game. The country's serious and mature opposition leaders understand well how things should run and perceive Russia as a stabilizing factor in the region.

RG: Do you believe that Israel and the U.S. will bomb Iran's nuclear facilities? Is there is a real possibility of a new war?

SL: As shown by the experience in Libya, the military roadmap is unfortunately possible. So let us be very demanding on all draft resolutions submitted to the examination of the UN Security Council and we will not allow more than their texts are interpreted as cunning.

As for Iran, we know what Israel and the U.S. say about it. However, there is no evidence that Iran has decided to develop a military component of its nuclear program. All of the nuclear program of the Islamic Republic of Iran is being implemented under the control of the IAEA (International Atomic Energy Agency).

Iran enriches uranium to 4.5% to produce fuel. Some of our colleagues say they do not understand why Iran needs to produce nuclear fuel at a time when fuel for the atomic power plant in Busher is supplied by the Russians. But, says the Iranian government, the country needs fuel for its research reactor in Tehran, which is not prohibited by the NPT (Nuclear Non-Proliferation Treaty), and enriches uranium to 20%.

This reactor uses a fuel of a higher rate of enrichment.

Unfortunately, the IAEA could not agree with Iran on a scheme to provide fuel for its reactor outside of Tehran. The fault was not ours for difficulties that have arisen in this way. Moreover, the Tehran reactor is not under embargo and Iran's desire to obtain fuel for it is completely legitimate.

It is important to know that what Iran is doing is not prohibited by the NPT Treaty nor Regulations of the IAEA. The problems arose when it was learned that many years ago, Iran had had a secret nuclear program. Since then, the IAEA has striven to understand the nature of the nuclear program. In practical terms, nothing that is forbidden was discovered in Iran.  The only documents found were those whose origin is the subject of clarifications requested by the IAEA from the government in Tehran.

Of course, we support this position because any violation of the Nuclear Non-Proliferation Treaty on nuclear weapons is inadmissible. But all nuclear units declared by Iran in recent years are long under IAEA monitoring. Iran's nuclear facilities are equipped with cameras that monitor in real time the centrifuges and other units and are regularly visited by IAEA inspectors.

Certainly we want closer cooperation between Iran and the IAEA and that Tehran begin to fulfill the Protocol to the Safeguards Agreement. Although this document is optional, it is important that Iran fulfill additional requirements resulting from this protocol, given the history of its nuclear program.

But I repeat: Currently, all nuclear facilities declared by Iran are under the control of the IAEA. I am sure that, in case of a bombing of Iran, a strong movement will emerge in the country in favor of breaking relations with the international community and expelling international inspectors and we are left to only guess about what is happening in Iran's nuclear facilities.

Any military threat would be the quickest way to cause political radicals in Iran to start actively developing a military component of its nuclear program. Currently, in Iran, the Middle East and in many Arab countries, the number of those is growing who claim that the only way to defend against all sorts of revolutions and regime changes is to possess nuclear weapons. This is the most dangerous consequence in terms of international security policy called the "democratization of the Greater Middle East" and the Arab Spring, which gave energy to the forces that promote chaos in the region today. 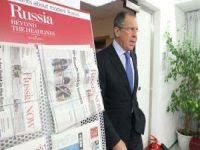