Ka-32 helicopters to resurrect in China

Beijing will begin the production of Russian multipurpose Ka-32 helicopters, Chinese media say. This aircraft has long been a pride of the national aviation industry. It is often used for solve specific problems under extreme conditions. Spokespeople for the Russian Helicopters confirmed the fact of negotiations with China on the subject. 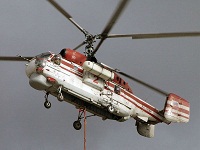 Ka-32A11BC is a modernization of the multipurpose helicopter Ka-32, which is used for transporting people and cargoes, as well as for construction works, loading and unloading vessels. The chopper can also be used in the forest industry. The aircraft of this type are used in fire fighting, search, rescue and patrol operations.

Noteworthy, the aircraft is based on the technological platform used for the Russian military helicopter for the Navy, as the Ka-32 is a civil version of the military anti-submarine deck-based Ka-27PL helicopter. The forerunner of the Ka-32 was the Ka-22 rotorcraft, which, the USSR declined to develop after two air crashes.

According to Chinese publication People's Daily, the first major project for the production of Russian helicopters in China will kick off in Beijing. The sides implement four programs within the scope of the project: airport expansion, sales, service and training of crew.

The main manufacturer of helicopters of this type is JSC Kumertau Aircraft Production Enterprise. Spokespeople for holding company Russian Helicopters deny the existence of agreements to open a factory to assemble Ka-32 helicopters in China. Likewise, the Chinese do not say that they are going to build the Russian helicopters already tomorrow. The construction period will take about two years, the amount of investments - 4 billion yuan. According to estimates of the business community, the company's turnover in five years will make up 65 billion yuan a year.

In early September, at ILA-2012 air show in Berlin, General Director of Russian Helicopters Holding, Dmitry Petrov, said that the holding was studying the possibility to organize the licensed assembly of helicopters in China. "If we, together with our Chinese partners, come to believe that assembling a model in the People's Republic of China will be more profitable than export shipments, then we will start working on the organization of the assembly production there." The official stressed out that it was more profitable for companies to create their own assembly lines at the order of not less than 50 medium-class helicopters.

According to the Chinese publication, the first phase of the project will produce 30 large helicopters. The annual production output will make up about 30 billion yuan. At the same time, the project includes the establishment of structures for design, research and development works.

The Ka-32A11BC is the only Russian helicopter that was certified by the European Aviation Safety Agency (EASA) in 2009. The aircraft is certified in North and South Americas as well as in Asia. Technically, it can be sold in the markets of most countries of the world. It is also the most popular model of Kamov Design Bureau abroad. There were large deliveries made to South Korea, where the fleet of Ka-32 exceeds 60 aircraft. There were more than 140 aircraft built in total, which operate in more than 30 countries worldwide.

Thus, Russian Helicopters may help China establish the production of one of its best aircraft to enter the market with this model. According to the recently published new edition of the state program for the development of domestic aircraft industry, Russia's share on the market of helicopters in 2025 is expected to make up 13.9 percent in civil and 15 percent in the military segment. In 2010, the index was 6 and 12 percent, respectively. The previous version of the program had the goal to increase the share of Russia in the civil helicopter market to 27 percent. According to Russian Helicopters, the share of the enterprise on the world market in 2011 made up 14 percent in money terms.

"In any case, any manufacturer considers expansion in the global or regional markets as an important element of the development strategy. In this respect, Russia should not be a mere supplier of natural resources, but it should also export sophisticated high-tech equipment. In this regard, our helicopter industry that has a powerful holding to effectively promote its products on the world market, has chosen the right strategy. Today the market is getting globalized, and one must be present in all segments. The holding produces quite competitive products and in this respect one should do everything to try various forms of cooperation and conquer new markets," chief editor of National Defense Journal, Igor Korotchenko believes.

During the APEC summit, President Vladimir Putin also spoke about the cooperation with Chinese partners in the field of aviation in two directions. "The first one is the creation of a large state-of-the-art helicopter on the basis of a Russian helicopter," he said. The second direction is the development of a wide-body aircraft, Putin added.

Not that long ago, it was reported that the talks between the United Aircraft Corporation (UAC) and the Chinese state-run concern Comac about the creation of a joint venture to develop a new long-range wide-body aircraft on the basis of IL-96 were close to completion.

In 2011, Russia launched the budget funding of the program of the high-speed helicopter. The range of the aircraft will make up 1,500 kilometers, whereas the cruising speed will reach 450 miles per hour. Russian Helicopters was also developing Mi-X1 and Ka-92 choppers, hoping to get the funding from the federal budget on the base of 50x50 scheme. In 2011, the federal budget allocated 400 million rubles for the project, and in 2012 - 700 million rubles.

It was planned that the first experimental models would appear from 2015 to 2017. The deadline was then pushed back to 2018.