General who deployed troops in Moscow in 1991 dies

The cause of death of Russia's former Defense Minister Pavel Grachev, who died on September 23, still remains a mystery. According to unofficial reports, the 64-year-old general died at Vishnevsky's Hospital after a stroke. It was also said that the general was suffering from an incurable disease. 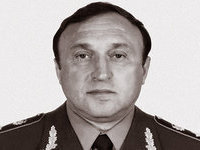 The former defense minister of Boris Yeltsin's era was hospitalized 11 days ago.

The hospital strongly refused to provide any information about the condition of Pavel Grachev. There were several versions discussed: a severe hypertensive crisis with cerebral manifestations, a stroke and even deadly mushroom poisoning, the Komsomolskaya Pravda newspaper wrote.

Most likely, Pavel Grachev died from a stroke, a source in the military medical circles said Monday. According to the source, Grachev was admitted to hospital with high blood pressure; he was completely sober. "Previously, there were media reports saying that he had mushroom poisoning, but this version is out of the question," said the source. A stroke developed on the basis of high blood pressure, which led to tragic consequences.

According to another version, Grachev was suffering from an incurable disease for several years. Former Defense Ministry spokesman Viktor Baranets told The Russian News Service that the general had been living out of town during the last few years. He was seriously sick. "Then there was this incident, which was presented as mushroom poisoning, still there was a plausible version to leave with dignity. The disease has killed him," said Baranets.

President Vladimir Putin, Prime Minister Dmitry Medvedev and Defense Minister Anatoly Serdyukov presented their condolences to the family and relatives of Pavel Grachev. The ceremony to bid farewell to General Grachev will be held in Moscow on September 25 at the Cultural Center of the Russian Armed Forces. A special commission led by Chief of General Staff Gen. Nikolai Makarov was set up to organize the funeral of Pavel Grachev.

Pavel Grachev was born in 1948 in the village of Rvy, the Tula region of Russia. In 1969, he graduated from the Ryazan Higher Airborne Command School. In 1981, after graduating from the Frunze Military Academy, he was sent to Afghanistan, where he served as the deputy commander and then commander of the 345th Guards Airborne Regiment. From 1983 to 1985 he served in the USSR. In 1985, he was sent back to Afghanistan. In 1988, Grachev was awarded the title of the Hero of the Soviet Union "for executing of combat missions with minimal casualties."

Grachev returned from Afghanistan with the rank of major general. After graduating from the Academy of the General Staff in 1990, he was appointed the first deputy commander of the airborne troops of the USSR. At the end of December of the same year, he chaired the airborne forces.

In 1991, Grachev participated in the August coup. As the commander of the airborne troops, he carried out the order of the Emergency Committee to deploy troops to Moscow. Afterwards, with generals Boris Gromov and Vladislav Achalov, he took the side of Boris Yeltsin. On May 18, 1992, he took the position of the defense minister in the government of Viktor Chernomyrdin.

Grachev repeatedly said that the army should stay aside from inner political problems, but in October 1993 he supported Boris Yeltsin in his confrontation with the Supreme Council and ordered to storm the White House in Moscow.

Grachev commanded the withdrawal of Russian troops from the territory of Eastern Europe. The Defense Minister was criticized for rampant corruption in the Western Group of the Russian Forces. He was in the center of the scandal connected with the acquisition of business-class vehicles for the needs of the Ministry of Defense in Germany. After the scandal, which received media coverage, he was nicknamed Pasha-Mercedes. Afterwards, Grachev acted as a witness in the murder of journalist Dmitry Kholodov, who was investigating corruption in the military.

An important milestone in Grachev's biography was his leadership of the Russian troops in the first Chechen war in 1994-1996.  From headquarters in Mozdok, the general personally supervised the combat actions of the Russian army in Chechnya. After several failed offensive operations in Grozny, he returned to Moscow. The general public was outraged about Grachev's remarks of "eighteen-year-old young men dying for Russia with a smile."

Grachev's strong criticism in connection with combat actions in Chechnya eventually led to his resignation from the post of the Minister in June 1996. Following the resignation, Grachev worked for Rosvooruzheniye and Rosoboronexport defense companies. He also served as an adviser to the general director of the Omsk Manufacturing Association named after Popov. He was transferred to the reserve only in 2007, when he was 60 years old.

Grachev was repeatedly blamed for the collapse of the army and for the mess during the first Chechen war. However, according to experts, one should be grateful to the former minister at least for his efforts to retain control over nuclear weapons.