If you ask a mature and able-bodied citizen, who pharaoh Tutankhamun was by nationality, you can come across surprising answers. It would seem that no one has a question about the nationality of world's first man in space Yuri Gagarin.  But it turns out that if you ask in Russian, there will be people who correctly answer the question by saying that he was a Soviet, although it is not a nationality, but only citizenship. 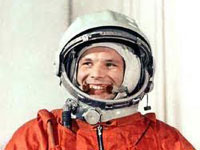 Three years ago, the schools of Kazakhstan accepted more that 40,000 copies of textbooks on the English language for the fifth grade. On one of the pages of the book you may come across the following question: "What was the nationality of Yuri Gagarin?" The question gives three answers to choose from: an Englishman, a Spaniard and an American.

Many parents immediately drew attention to multiple shortcomings in the textbook, although the authors claimed that the book was written by best pedagogues of the country. Tanat Ayapova, an author of the textbook on English for the 5th grade of Kazakh schools, claims that the book was written on a contemporary level. "This is what we need at this time. The book meets all requirements of the methods of teaching foreign languages," she said.

The nationality of the world's first cosmonaut disappeared as a result of a technical error, says the author of the textbook. Tanat Ayapova has no idea how it could happen. The textbook was checked several times at the Ministry of Education. However, ministerial bureaucrats promised to replace the textbook only next year. Now, as it appears, it is the fifth graders who will have to write the missing fourth, and the only correct variant: Yuri Alekseyevich Gagarin from the USSR. That would be funny if it were not so sad.

The author of this article finished a linguistic university. In Soviet times, there were many "technical mistakes" made, but there was no outright nonsense. There were ideological stupidities, of course. In the Great Soviet Encyclopedia (even in the electronic version of it) you can read a rather lengthy article about "Trotskyism" in which you will not find a word - let alone references - about Leon Trotsky. This was explained by ideology, not formal attitude to one's duties.

Personally, I do not think that the writers of the Kazakh textbook on the English language were hostile to Russia when they were working on the book. There is too little evidence to make such a conclusion. Our peoples, thank God, are friends with each other, and so are the rulers. It could be a typo, of course, although it appears to be a typical one. It is not typical for linguists, who do not have to know history (although, of course, highly desirable). The typo is typical for the general outlook of the world. Everyone can defame the past, but they do not value positive things.

Three years before the death of Pavel Popovich, a Soviet cosmonaut, twice Hero of the Soviet Union, the author of the article talked to the legendary man. In more than 40 years, Popovich sadly admitted that even his own grandson sincerely believed that the first cosmonaut was actually an American astronaut, but not Soviet citizen Yuri Gagarin. Hollywood blockbusters or propaganda that says that the Russians always drag somewhere behind played its role. Many people in the world believe that it was not the Soviet Union that defeated Hitler and Napoleon.

We do not diagnose a psychological disorder, we only try to ask why. Why portraying a "Russian" in an American movie, who, with a sledgehammer in his hands, tries to rescue the crew of an international spaceship from death? Why do they defame Russians in Westenr films, respecting sheer political correctness about Jews, blacks and others?

Ironically, politicians understand this, but common people get the impression that everything that is "Russian" or "Soviet" - all that sucks. The wave of such impressions has reached the former Soviet republics. If there is something bad, then it is only in Russia and in post-Soviet republics. If there is something good, then it is only there - in the West and in the U.S.

In contrast to North America, South America is also flawed - there is no democracy there, and all power belongs to drug lords. Stalin is almost like another Hitler, but Sir Churchill, who was ready to gobble up a half of the world - he is a cute English man, who choked on the world because it stuck in his throat.