What worries the members of the European Parliament besides the crisis in the eurozone? Correct: it is the Pussy Riot controversy and, albeit to a lesser extent, the civil war in Syria. European politicians do not attach much importance to other hot topics. Who cares about secret CIA prisons in the EU, the execution of dozens of miners in Africa or religious and ethnic cleansing in Myanmar, in which tens of thousands of people were killed? 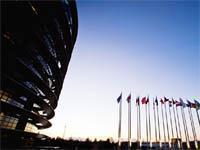 A new session of the European Parliament opened on September 10 in Strasbourg. The agenda included the following: a regular report from European Commission President Jose Manuel Barroso about the state of the European Union, the measures to save the euro and the ambitious EU budget. In addition, the MPs also discussed the situation in Russia and Syria. The debate about the foreign policy of the EU towards Moscow and Damascus with Catherine Ashton at the head is scheduled for September 11.

Given that Russia and Syria were selected as the main foreign policy subjects, one may conclude that European deputies consider the civil war in Syria, with thousands of dead and wounded people equivalent to the Pussy Riot case. One may even think that it is a subject of paramount importance for European deputies. In light of the scandalous case, the European Parliament will pass a special resolution condemning Russia on  September 13.

According to sources, in connection with the Pussy Riot verdict, the European parliamentarians intend to express their concerns about the situation with the rule of law, human rights and continuing intimidation, harassment and arrests of opposition in Russia."

This subject, as it turns out, pushed such an important subject as secret CIA prisons in the EU into the background. Representatives of Lithuania, Poland and Romania, where the CIA was keeping and possibly torturing prisoners, can be relieved. This subject will receive just a little attention, just like other hot topics, such as the massacre of 34 miners in South Africa and the persecution of Rohingya Muslims in Myanmar.

Thus, the new session of the European Parliament was held under the sign "Pussy." In addition, human rights activists are going to hold a massive rally in support of the street punk band in front of the Russian Mission to the EU. "We demand their immediate and unconditional release. The international support comes from many known and unknown people who live in different parts of the world," the head of the Russian branch of Amnesty International told Interfax.

Indeed, actions in support of Pussy Riot take place in many European cities, including the Catholic Vilnius and Warsaw. These are the capitals of the countries that are very interested in pushing the story of secret CIA prisons into the background as far as possible. They need to divert people's attention to something else. What can be better than the subject of the "suppressed freedom of expression" in Russia? Maybe this is the reason why activists of informal movements are free to rally in Vilnius and Warsaw not only in front of the Russian embassy, ​​but near the walls of Orthodox monasteries. The local authorities do not interfere in this at all.

For the European Parliament, it is another anti-Russian show that is important. The fate of the convicted punk girls does not bother them much. Arranging this show, they deliberately distract EU citizens from their own sins and problems. And there are a lot of them. Moreover, they do it in spite of the fact that similar actions are punishable in such conservative countries as Italy and Spain.

Last week, the Pussy Riot subject received a great deal of attention at the Parliamentary Assembly of the Council of Europe. The PACE demanded the immediate release of the girls. PACE rapporteurs prepared reports that said that "the judicial system in Russia is subject to political pressure and influence from the executive branch."

The head of American diplomacy added more fuel to the fire of the Pussy Riot case prior to the new session of the European Parliament. The U.S. Secretary of State Hillary Clinton openly condemned the verdict that was too strict in her opinion.

You can see colorful Balaclavas everywhere you look. As they say, if stars appear, then somebody needs them.