President says he is ready to cooperate with Mitt Romney, despite his criticism of Russia.
by Inna Soboleva

In his first interview since taking office, Russian President Vladimir Putin spoke about his expectations for the summit of APEC (Asia Pacific Economic Cooperation) in Vladivostok and gave his  opinion on the most current issues of domestic and foreign policies, including the Syrian conflict, the U.S. presidential elections and the conviction of the punk group singers Pussy Riot.

Putin said that Russian authorities continue to follow the course of democratization of the country. The head of state also countered criticism of a possible curtailment of the opposition after his return to the Kremlin.

"If that means requiring that everyone, including opposition representatives, comply with the law, then yes, this requirement will be put into practice regularly."

The president also said the action of the members of the punk group Pussy Riot at the Cathedral of Christ the Saviour, had great impact, both internal and external.

He said he knows everything that is going on but "does not intrude." Putin called the "punk prayer" sung in the country's main cathedral a "coven of witches."

Changes should not spill blood

The Russian President assured that Moscow has no intention of reconsidering the Kremlin's position regarding Syria.

"Should our partners in the negotiation process not reassess their own position? When I remember what happened in recent years, it is clear that the initiatives of our partners have not ended the way they themselves wanted," he said.

According to him, Russia understands very well that Syria needs change, but that does not mean it should come with bloodshed.

"In my opinion, the first thing to be done is to stop the supply of weapons to the conflict zone, but it has continued," he said.

In assessing the events in the Middle East, Putin said that the "Arab Spring" was dictated by the delay of the leaders of the Arab countries to undertake reforms.

"The leaders of these nations did not notice the trends drawn in their own countries and in the world, and did not promote the necessary reforms at the right time," declared Putin.

Putin also talked about the development plans of global missile defense and in particular in the European sector (EvroPRO). The issue has been an obstacle in negotiations between Russia and the U.S.A.

"Will this problem be solved with the current president, Obama, if he is elected to a second term in the United States? In principle, yes. But the issue is not limited to President Obama," said Putin. "There is also the military lobby, the U.S. State   Department and his machine is very conservative."

"To solve the problem of the missile defense system, it is necessary to reach an agreement internally and recognize that we are allies and trusted partners"

Still on the same topic, Putin called the anti-Russia rhetoric "a mistake" of Republican Party candidate for president of the U.S., Mitt Romney, who announced that he considers Russia "geopolitical enemy number one" of Americans.

Still, the Russian president assured that Moscow will work with Romney if he comes out victorious in the elections. "We will work with whoever is chosen by the American people," he concluded. 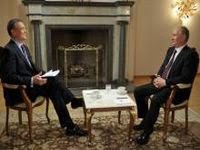