Former Governor of Massachusetts Mitt Romney and Congressman Paul Ryan - the official Republican candidates for president and vice-presidents of the U.S. - support the radicalization of the country's foreign policies, particularly about the relations with Russia. They both stated that during the primaries and say the same in the electoral program of the party. 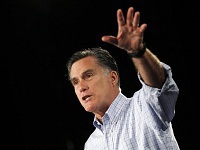 The Republicans approved the party program during their convention in Tampa, Florida. The program paid special attention to the US-Russian relations. According to the Republican Party, the Russian administration is authoritarian and does not respect human rights. The platform urged the Russian leaders to "reconsider the path they have been following: suppression of opposition parties, the press, and institutions of civil society; unprovoked invasion of the Republic of Georgia, alignment with tyrants in the Middle East; and bullying their neighbors while protecting the last Stalinist regime in Belarus."

The Republicans see the Russian Federation as a foe of the United States. They refer to Russia as a traditional rival of the United States along with North Korea, Iran and China. According to Republicans, the USA struggles with such threats as nuclear proliferation and terrorism against the background of North Korea's and Iran's attempts to acquire nuclear weapons. China's growing hegemony in Asia and Russia's activity, the threat of cyber espionage and terrorism are also extremely dangerous, the platform said.

Having signed the START-3 Treaty and rejected the plans for missile defense bases in Poland and the Czech Republic, having reduced the number of interceptors to be deployed in Alaska, having cut the budget, the administration considerably undermined the opportunities of the US missile defense ... President Barack Obama announced his intention to be "more flexible" in the relations with Russia after the election ... A Republican president, by contrast, will be honest and frank with Americans about his policies and plans,  the document also said.

The Republicans agree, though, that Russia deserved the normalization of trade relations with the U.S. However, they add, this should not be done without approving visa sanctions against the Russian officials who violate human rights. "We support the enactment of the law about "Magnitsky list" as a condition for the normalization of trade relations with Russia," says the program. At the same time, the party notes that the U.S. and Russia have common interests - the struggle against terrorism and nuclear proliferation, as well as the development of trade.

The criticism of Russia has been a keynote in Mitt Romney's speeches during the recent months. He released his first statements on the subject prior to the pre-election campaign. Romney's website published his election program in which he promised to curb Moscow in case he took office as president.

First off, Romney is going to revise the plans connected with the deployment of the missile defense system in Europe and other regions, taking account of U.S. interests. The Republican also intends to support European countries to reduce their dependence on the Russian oil and gas. He will also conduct serious work to strengthen the ties between the U.S. and Central Asian republics, according to Romney's website. To crown it all, Mitt Romney expressed his willingness to be the godfather of the Russian opposition and organize the training for opposition activists at American educational centers.

In late January, in one of his interviews, the Republican called then-presidential candidate Vladimir Putin a "tyrant" and a "threat to global security." Romney made one of his most controversial statements in March, when he was talking about the prospects of the deployment of the missile defense system in Europe. The politician called Russia "a geopolitical foe number one."

It is worthy of note that potential vice president Paul Ryan has also repeatedly expressed his distrust and dissatisfaction with Russia. In particular, he called the "reset" between the U.S. and Russia a "failure." "Our relationship with Russia is weaker not stronger," Ryan was quoted on democracyarsenal.org.

Ryan also pointed out the lack of political experience that Barack Obama had, noting that he had been a congressman long before Obama. In 2002, Ryan voted for the invasion of Iraq.

Having said the above, we may ask only one question. Will America ever wake up? Most likely, America will hibernate again in a few months.