In Russia's Yekaterinburg, unidentified individuals doused the monument to the first Russian President Boris Yeltsin with blue paint at night on August 23. According to the press service of the Central Directorate of the Russian Interior Ministry for the Sverdlovsk region, the vandals committed the action during the time period from 3 to 8 a.m. Cityscape specialists arrived to the monument promptly, covered the monument with special chemicals and then washed the paint off. They currently work on the restoration of the stone letters, which the vandals damaged too. 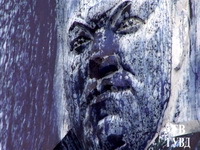 Law enforcers qualified the attack against the monument as vandalism, under article 214 of the Criminal Code. The second part of the article runs:  "The acts committed by a group of individuals, motivated by political, ideological, racial, ethnic or religious hatred shall be punishable with a prison term of up to three years."

Judging by the scale, height and density of the blue paint attack (the memorial is a 10-meter stele of white marble with the full-length bas-relief of Boris Yeltsin), the act was committed by several people. One person would not have coped with the task. In addition, the fact that the paint attack happened now (the monument has been standing there peacefully since February 2011), implies "the motives of political or ideological hatred."

After the verdict against Pussy Riot, a wave of abusive actions committed against various sanctuaries has swept across Russia (and other countries). Desecrating churches could somehow fit into the logic of a radical protest. However, why did they put balaclavas on the statues of Belarusian partisans in the Moscow subway? The trick can not be legally classified as vandalism, of course: nothing was broken or dirtied. However, common people can only care less about the legal nuances. Ordinary passengers of the Moscow subway, who made the statues wear balaclavas, were not acting under the Criminal Code. They were guided by their own conscience, rather than the "freedom of expression".

The hooligan was pulled off the pedestal and then handed over to police officers. "He insulted me personally and my grandfathers who fought in World War II," a passenger said after the incident.

Another case was more interesting. Someone wrote "Free Pussy Riot" on the Holy Ascension Cathedral in Russia's Pskov region. That seems to be an act of vandalism. However, a criminal case was not filed. The church was not damaged much, the inscription was painted over in a few hours.

The memorial to the first Russian president triggered heated debates in the Russian society from the very start. Roman senator Marcus Porcius Cato the Elder (whose personal motto was "Carthage must be destroyed") used to say: "After I'm dead I'd rather have people ask why I have no monument than why I have one."

However, the deal was done, and what happened to the Yeltsin monument in the night of August 23-24 is abominable.

Action provokes counteraction. Pussy Riot fans do not see any restrictions or common sense for themselves in their aspiration to take revenge for the infamous punk band. Russian bloggers called the incident in Yekaterinburg "an installation, expressing artistic protest against liberal values." Those, who advocate limitless freedom, can enjoy.