US State Department: Russia is bad just because it's Russia

Last year, U.S. President Barack Obama declared the support of sexual minorities a priority of U.S. foreign policy. Judging by the success of the figures of the "Arab Spring" in Egypt, Tunisia and Libya, this is exactly what happened. Now the US State Department is worried about the state of "religious freedoms " in the world. It goes without saying that US officials did not miss a chance to criticize Russia yet again. According to US, Russia oppresses Jehovah's Witnesses and Scientologists. 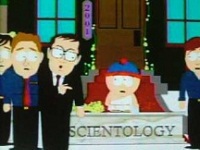 There is a joke about a school, where classroom doors had the following signs on: "Good Children", "Normal Children," "Bad Children", "Terrible Children" and the last one said - "Little Johnny." This is exactly the picture that one gets when reading the news stories about how terribly problematic Russia is from the point of view of the US Department of State. It appears that Madame Clinton wants to put Moscow into a corner like a naughty boy. Russia is to blame, always and everywhere, and even where there is not much to blame.

Making a report on religious freedoms in the world, US officials claimed that Russia violates religious freedoms.  This is what US officials do every year. The Russian Constitution "ensures religious freedoms, but other laws and policies restrict the practice of it." The Americans are worried about it. Madame Clinton is concerned too: the freedom of religion is a priority of U.S. foreign policy. Washington will always defend the freedom of religion in the world. Apparently, along with the rights of sexual minorities. What an interesting concept Washington has about priority!

The Moscow Patriarchate reacted philosophically to criticism from overseas. "The report from the U.S. State Department on the religious situation in Russia is not new, they publish it every year, and every year - unfortunately or fortunately - it is little different from all previous ones," Georgy Roshchin, Deputy Chairman of the Moscow Patriarchate Department for the Relations between Church and Society said.

It appears that this time US officials had to really try to fabricate the story about the "oppression", which unfortunate religious minorities have to suffer from in Russia.

"The Russian Constitution guarantees the freedom of religion, however, other laws and the law-enforcement practice deny official status to some communities, erroneously determining the true nature of their preaching as extremist," the report said. The critics did not bother to name any religious organization, which would be infringed in the Russian Federation. As we mentioned above, Russia is bad just because it is Russia.

Meanwhile, the triumph of democracy and religious freedom in America continues. However, it concerns mainly Christians and their faith. Many stores do not hang Christmas greetings posters anymore - they give people on abstract season greetings instead. Jews and Muslims have their own holidays in winter, so they may find public Christmas congratulations offensive. One should not forget atheists either: they are also citizens, they also have rights. Moreover, they now remove crosses from the tombstones of the American soldiers, who were killed during the past wars.

However, not all religious minorities feel confident in the States. For example, American presidential candidate Mitt Romney can easily fail just because he is a  Mormon. Romney stands for the freedom of Christian conscience in opposition to Washington's current policy that became opposed to Christianity. He is even ready to become a Catholic. He promised to get rid of the so-called Obamacare (the law on the protection of patients and public health service"), which requires employers should purchase insurance, which includes aborting drugs. He is ready to do that during the first day in the office.

"Religious liberty is at the heart of the American experiment. As a nation founded in part by religious dissenters, we enshrined it as the first freedom in our Bill of Rights. In the process of implementing Obamacare, the Obama administration is pressing forward with a rule that tramples on religious freedom, taking particular aim at Roman Catholics. The Obama administration is forcing religious institutions to choose between violating their conscience  or dropping health care coverage for their employees, effectively destroying their ability to carry on their work. What the Obama administration has done is indefensible. But this is about even more than President Obama denying America's Catholics their constitutionally protected rights. This is about the preservation of our freedom,» Mitt Romney said.

Interestingly, the US found a country, where, as the above-mentioned report says, religious freedoms develop and prosper.  This place on planet Earth is called Georgia.

Well, well. Mass rallies were held in Georgia last year against giving the status of religious organizations to all other organizations except the Georgian Orthodox Church. Local residents in Georgian provinces pogrom the homes of Protestant believers on a regular basis. In Georgia, the church openly and loudly expresses its attitude about the actions of the government - sometimes very sharply - and people listen to it. This is how religious freedoms develop and prosper in Georgia.

It's good to be Georgia! In Georgia, you can infringe religious freedoms as much as you want and receive no criticism from across the ocean.