The liquidation of the Zhukov Air Defense Academy in Russia's Tver may result in billions of losses for the country. It transpired that the renowned educational institution would be closed by July 1, 2012. 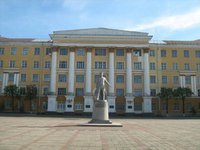 A source at the defense department of Algeria said in an interview with Pravda.Ru that Algeria, being one of the main partners of Russia in terms of defense cooperation, would have to look for other opportunities for training air defense personnel and for purchasing adequate military hardware. The source also said that Algeria would have to look for a replacement in case Russia fails to provide decent conditions for the educational process of the personnel of Algerian air defense. A replacement for that could be found in China, the source added.

If Russia is no longer capable of giving modern and adequate education that meets modern-day challenges, Algeria will have to refuse from the Russian military hardware. If there is no personnel the hardware will turn into expensive, yet useless defense machines.

There are many foreign students at the Air Defense Academy in Tver. There are more than 300 of them from 21 countries - from Serbia to South Korea.

A source at the Syrian defense department told Pravda.Ru that they hoped that Russia would change its mind. Otherwise, Russia may lose its own air defense personnel too.

The plan to close the academy contradicts to the law, which President Medvedev signed on December 1, 2011. It goes about the creation of the new type of armed forces - air and space defense troops. How can the new troops be established if there is no education system for them?

Optimists say that there is nothing dramatic about it. The teachers from the Zhukov Academy in Tver will supposedly be relocated to other schools. However, as experience shows, only 11 percent of military professors agree to work in a new place. As a rule, professors will not move to other cities for work. The majority of them are in their 50s and 60s - they prefer to stay home rather than move to a different city.

Russia's only one air defense academy is going to be closed within the scope of the military reform and optimization of defense spending. According to those plans, there will be only ten academies left in the country.

Why the air defense academy? Russia spends billions of dollars on the Olympic Games in Sochy, Formula-1 and the APEC Summit in Vladivostok. Doesn't the country have an opportunity to support such a nationally and internationally important academy?

Experts believe that the closure of military academies in Moscow could be based on the desire of certain circles to receive expensive real estate that the academies were taking. However, the city of Tver is nearly 180 kilometers far from Moscow. The Zhukov Academy in Tver occupies several old, pre-revolutionary buildings.

Everyone knows that all modern armed conflicts start with air raids. Does history teach the Russian administration anything at all? The West has already destroyed Yugoslavia, Iraq and Libya. Will the list continue?