What makes US politicians hate Russia?

Russia is the USA's main enemy. Mitt Romney, the Republican Party's most likely candidate for the American Presidency commented on this in the wake of talks at the summit on the subject of nuclear safety between Barack Obama and Dmitry Medvedev. 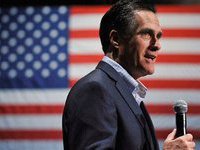 "Russia, this is, without question, our number one geopolitical foe. They - they fight every cause for the world's worst actors," he  said, commenting on the outcome of the meeting of the US and Russian presidents in Seoul.

"Russia - Unfriendly figure on the world stage. Fact that the president is seeking greater flexibility in relations with Russia despite the fact that he had nothing to say to the American people about the relationship with Russia - a very disturbing sign. I am very, very concerned about this. It - Russia is, without question, our geopolitical enemy number one "- said Romney.

What is it that has so incensed Mr Romney? He reacted in this way to the results of the meeting between Medvedev and Obama at the Nuclear Security Summit in South Korea. To be more exact, he reacted to a remark which the TV channel ABC attributed to the American President. It has been said that at the close of the meeting with Medvedev, he and Obama made an informal agreement concerning the placements of American anti-ballistic missiles on the Russian borders.

"It is my last election. After this election I will have more flexibility. All these problems, especially about the ABMs may be resolved, but the main this is to give me space to maneuver," Obama supposedly said. Medvedev promised to impart what he had heard to Vladimir Putin. "I understand. I will tell Vladimir this information," answered the Russian President.

Benjamin Rhodes, Deputy Advisor to the US President, attempted to smooth over the discomfiture concerning national safety. According to Rhodes, it was actually rather difficult for the two governments in the pre-election year to agree on delicate issues such as the ABM Treaty at the table because "both sides talk too much about these policies."

"This was a political year in which Russia had only just had its elections, and we were coming up to the elections for the Presidential Congress. It was not a year in which we could sort out extremely complex issues like these. That's why it's better to stop and let the technical experts get on with it, like the President said," maintained a high-ranking official in the American administration.

Obama tried to justify it himself. However, his words were far from accepted by his political opponents. "The situation which has developed at the moment does not promote substantial consultations. I think that we will get better results in 2013," noted the President.

The Republican Party have promptly started to make a fuss. Congressman Mike Turner sent a letter to the White House which urged Obama to "give an urgent explanation of his statement at the meeting with the President of the Russian Federation Dmitry Medvedev, which was held in the morning in Seoul." He also reminded him of the readiness to "block any attempt to weaken the anti-missile defense of the country." "I would like to declare with the utmost clarity that we and our colleagues do not envisage any kind of auction with Russia or other countries over the ABM Treaty," wrote Turner.

Romney's words remain at the vanguard of the attacks. He claims that he is not the first to address these concerns over Russia. We can recall numerous crude statements made by the former Republican presidential candidate, Senator John McCain. It is worth noting what he said in 2003: "America's foreign policy should reflect a sobering conclusion about the fact that the Russian government, which does not share our basic values, cannot be a friend or a partner and risk its own behaviour by putting itself in the category of enemies." In a similar vein he said then, what he still maintains today.

The list of senators and congressmen who have become hostile towards Russia goes on and on, extending to Republican Senator Ileana Ros-Lehtinen. Russia even has ill-wishers amongst the Democrats. Particularly the late Tom Lantos, the now healthy Benjamin Cardin and of course, Zbigniew Brzezinskiy who wrote in his book "The Grand Chessboard" that "the new world order under the hegemony of the USA is directed against Russia, at Russia's own expense and on Russia's ruins".

Which irreparable concession did Obama come to on the ABM Treaty? What made Romney and other Republicans correct him? There was no such concession. He refused the placements of radar in the Czech Republic, but the doubtful American installation was extremely unpopular amongst the local population. And ABM devices will be appearing in Poland and Romania in the coming years. Madeleine Kridon, aid to the USA's Minister of Defense said soon these anti-ballistic devices will be literally all over the world.

According to Kridon, the USA intends to develop its own ABMs in the Pacific Ocean, working closely with Japan, South Korea and Australia. In the Middle East, the Persian Gulf countries have also formed such alliances. Thus far, we have not heard anything about Romney's "installations". Instead of declaring Russia to be an enemy (and possibly China too), Kridon continued to talk about the threats emanating from Iran and North Korea.

"Measuring the advance of work with the aim of architectural development (ABMs), for those regions (Asia and the Middle East), we will concentrate our attention on the use of those approaches, which promote favourable opportunities of interaction with allies and partners who will help to neutralise possible threats to security which might arise, and also the strengthening of our partnership," said Kridon.

As yet, no such concessions on the ABM Treaty from the Obama administration towards Russia have been followed up. Romney may reproach Obama's administration for the fact that the President, Secretary of State Hillary Clinton and others who are responsible for the passing of laws and decisions, do not call Russia "an enemy". But they do not call Russia "a friend" either. There is nothing that can prove Washington's intention to be friends with Russia.

If what Romney has said is not just pre-election rhetoric, driven by the criticism of political opponents, then the masks have been thrown aside. A US presidential hopeful sees Russia as an enemy. He is not alone at this point. The hostility towards Russia is infected to a great extent by the American political elite, and Romney is only voicing the mood around him. Therefore, one should not expect progress on the ABM negotiations.

Even if Obama wanted to do something, they simply wouldn't let him. So it is not only the Republicans but also partly those from within Democratic Party.