Russia for Russians: Slogan of fools

The new law about political parties, which decreases the registration limit to 500 people, is expected to come into effect by summer. However, there are too many of those who want to receive the official registration. Russia's Justice Ministry has applications pending from 70 associations that would like to become full-fledged parties. 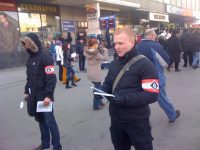 The extensive list of those willing to struggle for power raises concerns with many. In addition to such "good old" organizations as the party of beer lovers, the party of love and the like, the list also contains ultra-right organizations.

Six of 70 parties that use the words "Russian" or "national" in their names intend to defend patriotic and even nationalist ideas. They are: the Party of the Revival of National and Social Justice in Russia, the Club of Friends of the Russian People, the National and Conservative Party of Russia, We the Russians, and the National and Democratic Party of Russia. Three other parties use the word "Motherland" in their names. Leftist parties come second after the nationalist associations.

The nationalist movement "The Russians" announced the intention to set up a political party on Monday. Dmitry Demushkin, the leader of the organization, said that the party would originally have about 20,000 members.

In case the amendments to the law about the registration of parties are approved, the minimum limit for the quantity of members would be decreased to 500 people. "We do not want to make the party of 500 people. We want to have a large and ambitious party. We want to submit approximately 20,000 questionnaires during the registration. We would thus show that we are not some sort of a dwarfish organization," Demushkin said.

The State Duma and the Federation Council are to consider the bill about the simplification of the registration of political parties before the end of March. Ultra-right associations may take part in the elections already this fall. It is worthy of note that Demushkin previously chaired the extremist and the currently banned organization the Slavic Union.

Such parties work under the slogan "Russia for Russians." Can they really struggle for power in Russia, which is a multi-national state? Will the appearance of radical parties lead to the collapse of the nation?

Leonid Polyakov, a scientist of politics, said that the parliamentary parties should include a whole package of special measures in the legislation. At the same time, the expert added, there is nothing surprising about such a change in Russia's political landscape.

"This is typical of the whole European continent. Moderate rightist parties in Europe can be successful just because they adopt certain slogans and programs from rightist radical organizations. We can observe the same trend in Russia too. One should not be surprised about it at all," Polyakov said in an interview with Pravda.Ru.

"Russia is a multi-national and multi-confessional country. This is a fragile matter. If this world is undermined, the country may collapse and serious conflicts may emerge, even a civil war is possible," the expert said.

"The existence of such parties can be dangerous, of course. However, this is what we pay for the radical democratization. One should be aware of the fact that if we want to hear all voices in our political spectrum, we should also listen to those in the right front," he added.

"The norms of the Constitution and the laws of the Russian Federation forbidding anything that incites international, racial, interconfessional and interethnic strife must be formulated clearly. The programs and charters of such parties must not contain the phrases that can trigger confrontation between various groups of the population in the country. These are mandatory procedures that must exclude conflicts in the society that may emerge just because such parties exist," the specialist concluded.