Mr. McFaul, can we have 25 sergeants, please?

The events of March 5 at Pushkin Square in Moscow have greatly interested the American ambassador Michael McFaul. The Moscow Mayor's office said that in the future they will take into account the behavior of the opposition leaders when coordinating rallies and processions.

The opposition rally in Moscow resulted in the detention of nearly 250 people. These are not only those who were at Pushkin Square and then tried to arrange a march on Tverskaya Street. Eduard Limonov's supporters were detained during the unauthorized rally at the Central Election Committee. Soon after, three dozen nationalists who also tried to march were brought to a police station. 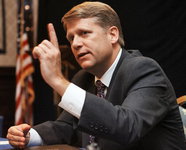 The U.S. Ambassador Michael McFaul, however, was not interested in the fate of Limonov's supporters and nationalists. His attention was riveted to the events at Pushkin Square, where his acquaintance, Ilya Ponomarev, tried to organize a meeting with a State Duma deputy. To help his cause, Ponomarev, along with his colleague from the "Left Front" Sergei Udaltsov and blogger Alexei Navalny climbed into a fountain on Pushkin Square.

The appeals of the police to leave the fountain produced no effect on the protesters. As a result, they had to be taken out of the fountain by force. Ilya Ponomarev, who has parliamentary immunity, was left in the fountain alone.

This "extraction" of the opposition from the fountain drew the attention of the American ambassador, who felt his duty to speak about it on Twitter: "Troubling to watch arrests of peaceful demonstrators at Pushkin Square. Freedom of assembly and freedom of speech are universal values."

The night "tweet" immediately inspired a group of enthusiasts to prepare a message for Michael McFaul. The message said that they cannot follow the example of the U.S. police who have demonstrated their humane treatment towards the protesters during the Occupy Wall Street protests unless they are armed with plastic bullets and grenade launchers filled with tear gas. The enthusiasts asked Mr. McFaul to lobby the delivery to the Russian Federation of the tools to protect democracy, as well as commission 25 experienced officers for conducting trainings.

Joking aside, but the consequences for the organizers of the opposition of the protest may be much more serious. Deputy Mayor Alexander Gorbenko said that the authorities will take into account the events of March 5 when coordinating rallies and processions.

"Yesterday puts us in a certain position during negotiations because some of the people who applied for a rally on March 10, yesterday publicly called for disorder, breaching the law. We will take this into account when negotiating other applications," said Gorbenko.