USA has all rights to interfere in Russia's affairs

Less than two weeks are left before the presidential election in Russia. However, it turns out that the US and EU administrations already know how they are going to perceive the results of the vote in Russia. The Vice President of the US-based human rights organization Freedom House described the elections of March 4 as dishonest and uncompetitive. 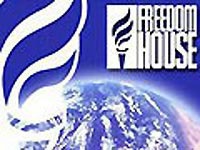 Christopher Walker, the Vice President of Freedom House, stated that the Russian authorities had not showed any efforts in organizing the election process, which could be referred to as honest and competitive. According to him, the Russian authorities manipulate the election system and continue putting pressure on officials to achieve certain results. The Russian administration sees Vladimir Putin as the winner already during the first stage, Walker said in an interview with Svoboda Radio Station.

Mr. Walker also said that the Russian authorities used far-fetched reasons to remove liberal candidates, such as Grigory Yavlinsky, from the election race. They put more pressure on both the media and observers against the background of the ongoing propaganda of the state-run media. It is hard to expect objective results from the vote under such conditions, Walker, a former State Department official, concluded.

He assured that everyone was interested in the stable, democratic and prosperous Russia. However, he added, the so-called developed democracies would continue to interfere in Russia's internal affairs. According to him, those in Russia, who dislike the foreign attention to them, have the right for their own point of view. "From my point of view, the appeals not to interfere in the Russian affairs are pointless," he said.

It is worthy of note that this is not the first such confession from the well-known international organization. In January of this year, Freedom House published a special report devoted to the Arab Spring. The authors of that report said that the recent revolutions in several Arab states became an important achievement in the struggle for civil freedoms. The achievement, the report added, was comparable to the collapse of the Soviet Union in 1991.

Needless to say that the report paid special attention to Russia. US human rights activists believe that the level of freedoms in Russia were comparable to that in Rwanda, Oman, Qatar, Gabon and the West Bank of Jordan, which the UN considers an occupied territory.

In particular, Freedom House pointed out a wave of unexampled protests that took place in Russia in connection with violations committed during the parliamentary elections in the country. The protests marked the decline of the popularity of the Russian leaders, FH officials said. Even though US-based experts have questions about the capacity of the forces that headed the post-election protests, the report clearly says that Russia was not alone in its rejection of the authoritarian administration.

This is exactly what Mr. Walker says on the threshold of the presidential election. For some reason, he takes interference in the internal affairs of the Russian Federation for granted.

Chris Walker is not the only person who proves that the US is willing and able to assist those who seek regime change in Russia. As the financial crisis was gathering pace, the US State Department did not cut the funding of the programs that targeted the "development of democracy" in the Russian Federation. It goes about $65 million. Moreover, the State Department and the USAID managed to increase the budget for the following year.

The leaders of the Russian opposition have recently had a meeting with US Ambassador to Russia Michael McFaul, a specialist for "velvet revolutions." Yevgenia Chirikova and Boris Nemtsov also had a meeting with the president of Freedom House David Kramer in Washington in September 2011.